Is Rio ready for the World Cup?

Police crisis room: the plan is for it to be empty

The hole may be much further down, as we say in Portuguese

The foreign press visit this week to the Rio state public safety Integrated Command and Control Center (CICC is the Portuguese acronym) was one of what promises to be an increasing number of schizophrenic experiences, as time goes on.

Brazil has long been described as “land of contrasts”, but until now this usually referred to contrasts between rich and poor, between the public and private sector, or between nature and manmade construction.

The same day as the CICC visit, an early morning train derailment caused a major snafu in Rio’s transportation grid, affecting a reported 600,000 commuters. Although this has nothing to do directly with the city’s public safety policies, it’s another worrisome aspect of daily life here, present in everyone’s minds.  Yes, we have new dedicated bus lanes and the metro is being extended to Barra, but traffic is still horrendous and the average age of Rio’s trains, according to O Globo, is 36 years.  The average age (how about a museum?).

International Olympic Committee chief Thomas Bach, visiting Rio the day of the derailment, spoke about Rio’s transportation challenge in this interview. Strangely, few think to note that SuperVia, the concession running Rio’s trains, is sixty percent owned by Odebrecht Transport, an offshoot of Brazil’s top construction company, heavily involved in stadium work, among much else. Nor is it common knowledge that 30% of Odebrecht Transport itself is owned by the federal government, by way of  its payroll deduction-funded FGTS fund.

So why, with a top private sector company and federal funding, is it so difficult to upgrade Rio’s trains? And why has the former president of the Rio chapter of the Institute of Brazilian Architects, Sérgio Magalhães, met with deaf ears with his repeated suggestion that the trains be incorporated into the metro system (a concession run by the OAS construction company and the pension funds of the Banco do Brasil, the Caixa Econômica Federal and Petrobras?)

Police dispatchers, in the next room

(And why, we might also ask in passing, though soccer isn’t played in the water, is it so hard to clean up Rio’s harbor? The way things are going, Olympic sailors, two years from now, may well be tacking around discarded sofas, amid much other trash and pollution.) 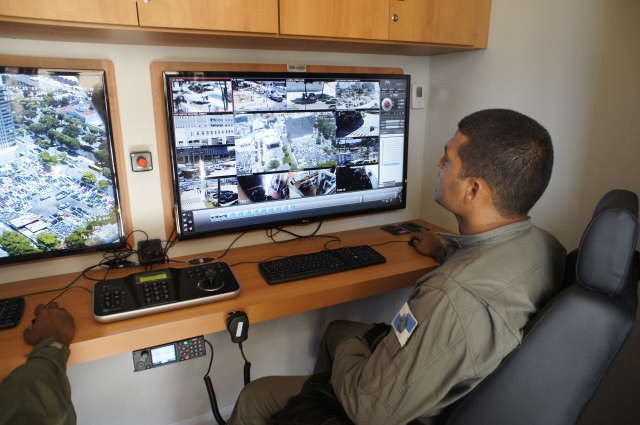 Despite the discrepancies within the public safety sector and between it and other public services, government officials point to Brazil’s bunch of megaevents as a watershed moment.

They “catapult the development of our police forces,” said Humberto Freire de Barros, general operations coordinator for the Justice Ministry’s Special Secretariat for Mega-events, in the new auditorium. He spoke about a legacy of definitive change in public safety. ” We are using the mega-events to improve our police.”

Comparisons are difficult to come by, either over time, or between Brazilian states (Readers, help on this would be appreciated). According to the state Public Safety Secretariat, Rio police spending in 2007, before Governor Sérgio Cabral took office, was US$ equivalent 974 million, with a total police force of 48,000, and in 2012 this rose to US$ equivalent 2.2 billion. By the end of last year, the state police force totaled 54,000 men and women.

Eyes on the metro

No official present would go so far as to say that the Rio police are at the forefront of public safety modernization in Brazil, but they did note that, when it comes to mega-events, the forces here have more experience than those in other cities. And money is pouring in, with almost US$ 300 million equivalent earmarked in Banco do Brasil financing for a new state radio communication system, three helicopters, and 45,000 bullet-proof vests, among other items.

With all this investment, will the Rio police need help from the Brazilian military? 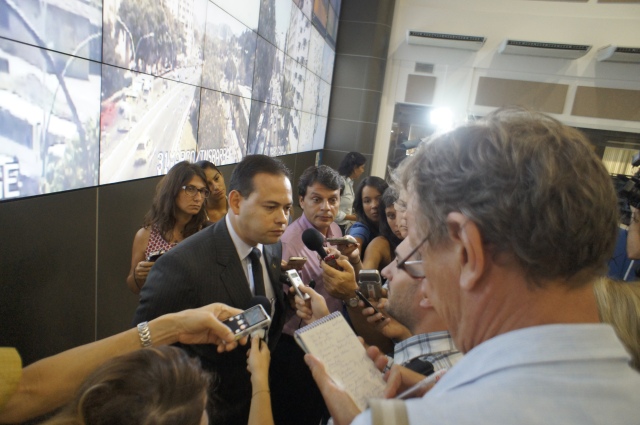 That depends on the challenges they face during the Cup, officials said. The Army has participated in public safety activity in the past, including the 1992 United Nations environmental conference, ECO 92, and in November 2010, when the Complexo do Alemão was occupied in order to stop vehicle torchings around the city.

In December, the Defense Ministry published a new regulation changing the constitutional definition of national military forces, so they can easily be called upon if needed — including in the case of urban disturbances.

Federal and Rio state officials have obviously been planning for such an eventuality. Asked by foreign reporters what the biggest threat might be to the Cup, one official would only say that terrorism isn’t at the top of his list. Another official repeated the word cinturão, or big belt, a tactic police used successfully during the 2013 Confederations Cup, to keep protesters far from soccer games.

How likely are the protesters to make a reappearance this June? The contrasts — a sort of mixed message — are key. The state of Rio may well have accomplished an enormous amount of police modernization. But credit is hard to fully award when you can’t stop yourself from looking sideways: what about those Leblon barracks, and what about the antique trains, and the filthy bay? And what about angry citizens, such as a neighbor who came across a grocer who’d been shot early one morning in Cascadura last weekend, and called one of the 190 attendants in the fancy new CICC?

Half an hour later a police car arrived, and an officer told a group of neighbors assembled around what was now a body (the man’s hand was moving, earlier on) that the police don’t do first aid. Also, that the cops hadn’t heard about the shooting over the radio (it didn’t work), but someone in the street had directed them to the crime scene. Forty-six minutes later, an ambulance drove up.

One of the government officials presenting the CICC, on hearing the story, explained that 190 is for police emergencies (crimes), 192 is to call a city ambulance for lesser health emergencies, and 193 is for the firemen, who, in addition to putting out fires, also save people’s lives.

Here you can see how different countries organize their emergency numbers.

When Rio first began to turn around, in 2008, Brazilians often used the expression enxugar gelo, or drying up ice. They wondered if the new policies would ever be able to address the enormous problems facing the city.

Much has changed since 2008; now one doesn’t hear this expression so much any more. But people do comment on just how far down “the hole” is. They look at an achievement and say “o buraco é mais em baixo”.

The hole in question, according to this blog’s research, might be in the cemetery,  at the bottom  of a well, or anatomical. In any case, its location, lower than what you might have thought, points to continued complaint and protests.

Yet, of all the twelve World Cup cities, Rio may turn out to be the best-equipped to handle them.

“A rich country is a country without poverty”

9 Responses to Is Rio ready for the World Cup?