Intelligent life in Rio, despite lack of funds

We get bad news daily. Nevertheless (or maybe because of this), Rio is seeing growing activity in the realm of ideas and beliefs. People are asking questions, expressing themselves, joining together. It’s actually hard to keep up with it all.

We may one day see this turbulent year as an opportune, rich moment. Social inclusion (poverty in Rio is said to have fallen by half from 2013 to 2014, according to a new IETS study) opened the door to new behaviors.

The real estate market, which had neglected affordable housing, has lost impetus. This could lead to a reevaluation of the Port area’s vocation and also that of Barra da Tijuca and its surroundings. A recent New York Times story reports that only 230 of the 3,604 apartments in the 31 towers meant to  house Olympic and Paralympic athletes have been sold up to now.

In the Port area, there’s still time to implement a unique landscape project, the Circuito da Celebração da Herança Africana (African Heritage Celebration Circuit). Created by landscape designer Sara Zewde together with the city’s Instituto Rio Patrimônio da Humanidade, the project would have a significant impact at a time of increasing black consciousness.

On November 19th, Sara Zewde will participate in a roundtable discussion of the project, at Columbia University’s Studio X, in Praça Tiradentes, open to all.

Heloisa Helena Berto, Yalorixá Luizinha de Nanã, a candomblé spiritist, is fighting to preserve a spiritual locale on the banks of the Jacarepaguá Lagoon in Vila Autódromo, next to Olympic installations

There was much talk of race, as well as gender, at the FLUPP, the Festa Literária das Periferias (Periphery Literary Festival) where public school students this month had a chance to enter the world of books, joining Brazilian and foreign writers. One student read a poem she’d written on her cell phone, saying she didn’t want to be called “neguinha” (little black girl) any more, to wild applause. Another cited the macho comments women hear in the street. 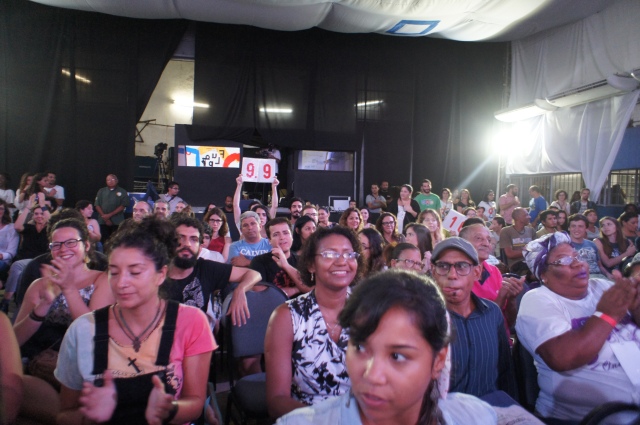 Jurors at the exciting FLUPP international poetry slam at the Babilônia favela, show their scores

FLUPP founders Júlio Ludemir and Écio Salles, honored at the end of the party, with young Babilônia resident Ágata Cris, destined by her name to become a writer

The day when beer manufacturers do away with bikini-clad women in their ads in Brazil, however, as is planned for the Superbowl, has yet to come.

The environment is also the focus of greater activism. On November 8, at the invitation of the São Paulo Greenpeace office and the Meu Rio (My Rio) public policy activism NGO, a new group formed to push for more government transparency and responsibility at all levels, regarding the ongoing drought. Rio’s reservoir levels are seriously low.

Days earlier, a mining residue damn broke in the neighboring state of Minas Gerais, creating even more concern in Rio de Janeiro over Brazilian government capability to manage environmental needs as well as crisis situations. Rio may soon be dealing with its hottest summer ever, during an economic recession with worrisome impact on jobs, income and public spending. 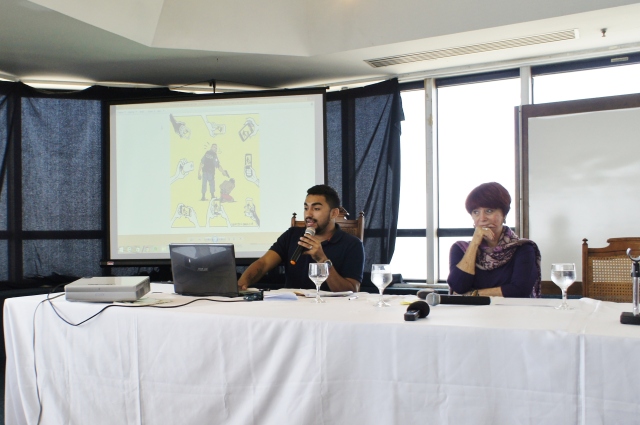 Raull Santiago (left), from the Papo Reto (Straight Talk) journalism collective of the Complexo do Alemão favelas, told workshop participants what it’s like to live with the War on Drugs

At a time when the state pacification program is already in trouble, this would be just the ticket for more violence. Rio de Janeiro doesn’t need to go looking for citizen/police conflict.

To help journalists rethink the long and violent War on Drugs in the Americas, CESeC, with the support of the Open Society foundation, organized a two-day workshop for area professionals and students, Drogas em Pauta (Reporting on Drugs). The workshop ended with the announcement of the Gilberto Velho Mídia e Drogas award winners.

Even for those who already believe it’s time to move drugs from public safety to health policy — decriminalizing them — the workshop offered a great deal of surprising information. U.S. Prohibition in the 1920s saw 50,000 deaths in gang wars. Thousands became ill or died from drinking methyl alcohol. Ultimately, it became clear that decriminalization rather than prohibition was better for society as a whole. This, despite the fact that alcohol has more negative effects on users and those around them than do many drugs, including marijuana.

There are also myths about drugs. Marijuana doesn’t  automatically lead to the use of other substances, as has long been preached. Researchers have shown that crack isn’t as addictive and deathly as was thought. And it’s interesting to ponder the fact that some drugs tend to expand consciousness and strengthen social ties among humans, which can threaten the status quo.

During the economic boom years here we did see a great deal of debate on various issues and ideas. It could be, however, that consumer spending and easy access to funds undermined individual and group reflection on identity, social roles and moral questions. Today presents us with an opportunity that many in Rio are doing all they can to profit from. As statesman and General Charles de Gaulle once said, “Faced with crisis, the man of character falls back on himself. He imposes his own stamp of action, takes responsibility for it, makes it his own.”

3 Responses to Intelligent life in Rio, despite lack of funds