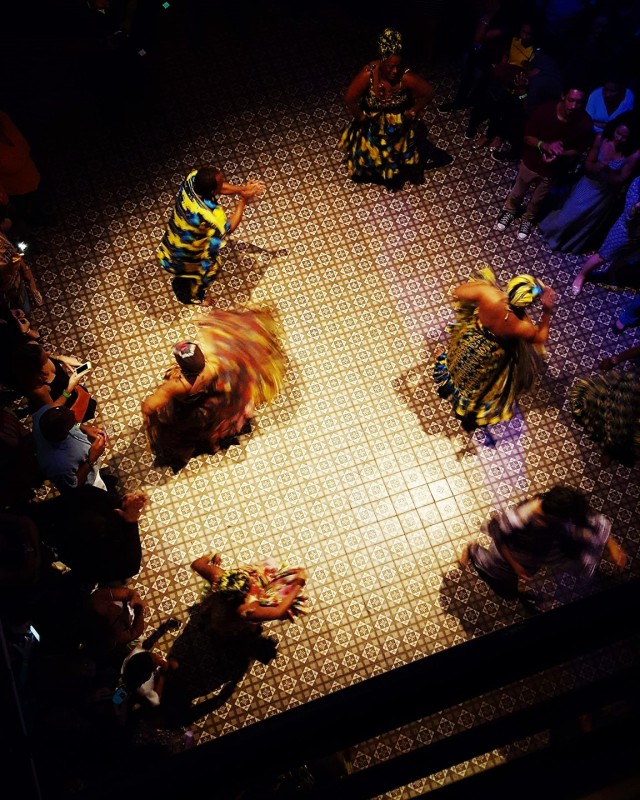 Jongo dancers at a pre-Olympics party, downtown: for Crivella, culture is about job creation. For  Freixo supporters, culture is the glue of social fabric

[Election update, Oct. 31 2016: Marcelo Crivella did indeed win yesterday, with 1.7 million votes, or 59% of all valid votes. Marcelo Freixo got 1.16 million, 41%. Most impressive of all was the number of people who did not select any candidate at all: two million, or 42% of the electorate of close to five million, total. Crivella takes office in January with just over a third of the Rio electorate behind him to any degree. The lack of interest in politicians is widespread  in Brazil; not even former presidents Lula or Dilma voted yesterday.]

On the day of Rio’s second round of mayoral voting, we face two uncertainties, as well as that of the winner’s identity: what proportion of voters will choose no one at all? And how did we come to this bizarre race between a socialist and an evangelical?

After Friday night’s uninspiring final debate, Marcello Crivella lost ground, but was still poised to win. The last Datafolha poll shows him at 58% of valid votes, against 42% for Marcelo Freixo, among those who intend to choose between the two. Ibope came in with numbers that statistically match: 57% for Crivella and 43% for Freixo.

In the 2012 mayoral elections, which incumbent Eduardo Paes won in the first round, abstentions plus null and blank votes totaled 32% of the nearly five million-strong electorate. If this portion were a candidate, he or she would rank second. Four years later, this number is likely to be even bigger.

Paes’ first-round failure to meet success with his handpicked successor, Pedro Paulo Carvalho Teixeira, is part of the explanation for a second-round choice that has forced thousands of carioca voters to disavow responsibility for the result (though this is of course an illusion).

On one level, Pedro Paulo, long Paes’ right-hand man, was a personalist choice meant to preserve influence, in the same vein as those made by Lula (Dilma) and former governor Sérgio Cabral (Pezão). The outcomes in all three cases can be said to demonstrate the strategy’s folly. Given a lack of a consensus regarding Paes’ promised Olympic legacy and Pedro Paulo’s wife-battering image, the promise of continuity simply was not enough to get voters on board with Paes’ PMDB.

Ever since the close of the Paralympics, conversation in Rio has centered on politics. Many cariocas say they seek honest hardworking candidates who’ll take a practical approach to the city’s problems. This is Paes’ most basic profile; if the PMDB had chosen former municipal and state secretary Carlos Roberto Osório to be the beneficiary of party and City Hall machines, he would have been a viable choice over either of the final front-runners.

Interestingly, the Paes/Osório profile is exactly the one that Crivella has worked to fit himself into, and will almost certainly get him elected. Despite himself, that is; many voters reject his religious ties and reported plans, as well as his views on women and homosexuality.

What do voters want? Here’s the question politicians have grappled with since the 2013 street demonstrations, even as they dodge corruption allegations. Clearly, the game has changed. Mindsets have yet to catch up. Sometimes it seems as if all Brazil is perplexed by the highly unequal society it has built. How to deconstruct it, while keeping it vital, is the million-real question.

Conservative, oldtime politicians aren’t the only ones who flounder. Failing to perceive he had a real chance of winning, given Crivella’s outdated values, Freixo moved late to temper an idealistic and impractical platform (despite Lula’s winning 2002 example). What’s more, he alienated potential centrist voters. “This city is ours. We vanquished the PMDB for Brazilian democracy, against this coup-mongering party,” he told supporters downtown as soon as the Oct. 2 polls closed, awarding him a second-round slot.

Rio’s next mayor will have no Olympics to look forward to, no Papal visit, no United Nations conference, no World Cup. Instead, he’ll be plagued with interest-group demands, debt payments, falling revenue, a tragic state financial and economic context, rising crime, a swollen bureaucracy and a possibly intractable City Council.

He will be drawn into state and national politics, with their own sets of time-consuming limitations, demands and challenges.

The learning curve will be steep, too. Crivella has shown ignorance of Rio’s geography, as well as of simple facts regarding urban development and municipal transportation. Friday night he mistakenly stated that not all BRT vehicles have air conditioning; it’s the non BRT vehicles, normal buses, that are the issue. Just when most cities are encouraging people to leave their cars at home or abandon them altogether, he plans to build underground parking garages downtown. His proposal to provide job training, entrepreneurship and job creation in favelas, which he calls “comunidades carentes” (needy communities) is likely to raise hackles among leaders with a more three-dimensional view — though such programs may well may find receptivity among residents.

Freixo also has much to learn about urban issues. He told O Globo interviewers last week he planned to bring back bus ticket-takers, who have been phased out this year as bus revenues turn ever more electronic– and thus more accessible to city officials working on transparency and fare composition.

If in fact elected, Crivella is likely to be harassed by the PMDB, still strong in Rio, and outgoing mayor Eduardo Paes, said to be aiming for the presidency in 2018. Last week, a top political columnist predicted for RioRealblog that, pressured to spend funds the city doesn’t have, given the Fiscal Responsibility Law, Crivella (whose name has also popped up in a Lava Jato plea bargain draft) won’t make it to the end of his term.

Check back tomorrow for an election update.