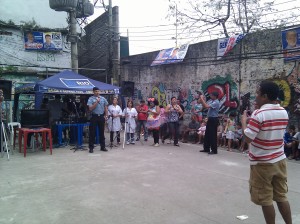 [UPDATE JAN. 19, 2011 With Brazilian  ticket sales of over 11 million, Elite Squad 2 premieres in the U.S. this Sunday at the Sundance Festival, hors concours. DVD sales in Brazil begin Feb. 10]

Tropa de Elite 2 (Elite Squad 2) is already a huge sucess in Brazil, breaking a 20-year box office record (see the trailer via this link). Almost 8.5 million people have seen writer-director José Padilha’s new film so far, a Brazilian cinema number second only to audiences for Dona Flor and Her Two Husbands, in 1976. The film, which has already brought in US$  17.3 million equivalent, will be shown at the Sundance and Berlin film festivals in 2011. More complex than the first Elite Squad, the sequel may present difficulties for those unfamiliar with the public safety issues and the changes taking place in Rio de Janeiro. But Padilha seems to be more concerned with influencing local events by way of his film, than with selling popcorn in Peoria.

The continuation of Elite Squad portrays a Rio 13 years down the road from the first movie, where cop-run paramilitary groups have taken over much of the city and the knot to be untied is political. In the movie, the media work hand-in-hand with politicians who curry votes in communities ruled by militias. As a result, the police answer to politicians’ needs instead of those of the general populace– allowing the militias to garner power and territory, unchecked.

The Elite Squad movies are partly based on fictionalized memoirs by real-life cops (and others) and many events in this new film are drawn from reality. Rodrigo Pimentel, one of the screenwriters, gave this interview about the subject,  in Portuguese. Just days before the film launch, PSOL state legislator  Marcelo Freixo, on whom a character who denounces militia activity is based, was reelected by a landslide.

A CALL FOR ACTION AS RIO STRUGGLES TO CHANGE ITS WAYS

“Today’s situation in Rio poses a serious question for the UPPs,” Padilha is quoted as saying at the premiere. “In ten years, how will the police behave in the communities they occupied? Cidade de Deus already has some militia members going into the drug business. If today’s police force doesn’t change, it may well be that we are substituting drug traffickers for uniformed paramilitary troops… as long as the UPP is in the media, the police will keep order. But police salaries aren’t increasing and there’s no change in the personnel selection process, so what will happen? If it was so easy to go into favelas and disarm the druglords, why didn’t they do it before? Because corrupt police are the drug traffickers’ partners.”

Contrary to Padilha’s statement, the state government is changing the face of Rio de Janeiro’s police force, with pay raises, fresh recruits and a new focus on human rights. But the BOPE, the elite squad of the military police at the center of the film, is altogether a different animal from the young men and women occupying and “pacifying” favelas. And the militias, with their very own elected representatives in the state legislature and city council, prevalent in the city’s poorest western sector, are perhaps a worse problem than the druglords.

In the final scenes of Tropa de Elite 2, a dispirited Beto Nascimento, masterfully played by Wagner Moura, testifies before a largely corrupt Rio de Janeiro state legislature. “When he was ten, my son asked me why I killed people, ” he says. “I don’t know the answer to that question. But I do know the police don’t pull the  trigger on their own… The military police must cease to exist.” And the scene switches to Brasília, with a sweeping view of the congressional buildings.

Perhaps not coincidentally, the same day Padilha’s new movie premiered, Rio’s civil police force (separate from the military police, dedicated primarily to intelligence and investigative work) made eight militia-related arrests in the western part of the city, including those of a civil police inspector, an army officer and two military police officers. According to O Globo, six months ago the police inspector arrested a local paramilitary group and then took on their illegal activities, which included the sale of cable tv signals, bottled gas and the extortion of a  R$50 weekly “security fee” from shopkeepers.

As reported here, police action in Rio’s militia fiefdoms has been only partially successful. After a crackdown last month on militia members in the North Zone, which included the arrest of former and current military police officers involved in violence, extortion and illegal activities, drug traffickers quietly took over the territory– which they’d previously lost to the militia.

Padilha says he is inspired by Greek director Costa-Gavras, whom he honors in one scene of Elite Squad 2 with a movie marquee. “Costa-Gavras is known for making political movies meant to intervene in reality. We made both Elite Squad films this way,” Padilha told O Globo. Cinema executives, exuberant after seeing the new flick, say they expect full houses for a long time to come. And this, at very least, will lead people in Brazil talk, think, and just possibly, act.

INTERESTING FACT: Military policy officer André Batista, on whom the Tropa de Elite character André Matias is based, negotiated with the hostage-taker of the #174 bus, in  Rio de Janeiro in 2000. The negotiations failed; after more than 4 tense hours, with live tv broadcast from the scene, hostage-taker Sandro Barbosa do Nascimento, a survivor of the 1993 Candelária massacre of children, killed hostage Geisa Firmo Gonçalves– and he was then killed by the military police.  “… I knew what to do, but we couldn’t save the girl’s life,” Batista said in a recent O Globo interview. “We didn’t have the equipment. The telescopes on the precision rifles were mildewed. And we didn’t have an armed group, trained to go in and kill the hostage-taker. At that moment, it was a total failure.” A documentary about these events was José Padilha’s first feature-length film.