How the movie Rio affects the real Rio 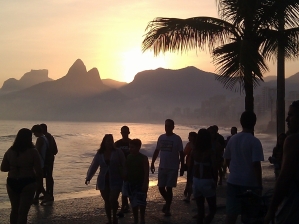 After Rio, the masses are going to want to see the ‘happiest people on earth’

We were already dealing with the expectation of creating the best World Cup and the responsibility of going all out with the Olympic Games opening ceremony. Now we’ve got the tough challenge of bringing to life a cartoon city, the 3D stage of the happiest people on earth, where macaws love each other, confront eco-villains and bring eternity to the most beautiful species of the terrestrial nursery.

If I were the Rio the world awaits after seeing Carlos Saldanha’s gorgeous movie, I’d be paralyzed on an analyst’s divan. It’s the biggest tourism ad campaign Hollywood has ever given to a city.

No one — better stock up on coconuts and Globo biscuits! — can be that spectacular in real life.

Up to the day before yesterday this was earth’s end, the place where criminals came to spend their train robbery cash and have a grand old time, a civilization ruled by a scarcity of law and graced by a generous pagan belief that below the Equator, sin exists not. Ten percent payoffs were the order of business. This was “flying down to Rio”, the place-where-no-one-is-looking, the Nazi hideaway, the cheap sex, the say-what-you-may. The jungle where the Simpsons had to fight snakes in the streets.

This was how it was up until just a little while ago, when the symbol of this half-bandit, half-sex-maniac-psychopath civilization was the Englishman Ronald Biggs, thief transformed into good citizen by the tropical climate. The fellow took on the mantle of our native nice guys and let the Sex Pistols vomit at his gate in Santa Teresa.

Over and above the criminals, as of yesterday morning’s news, there was only the power of the mosquitoes.

This was an inhospitable forest, the trash dump of Gramacho, [movie bandit] Tião Medonho, fecal coliform bacteria and the American ambassador’s kidnapping. Low blows, Molotov cocktails on consulate glass, diarrhea, the runs, and the need for visitors to bring water from home were the all the rage.

Arriving tourists couldn’t say they hadn’t been warned. Falling-apart favelas were in all the movies.

All of a sudden, this became the Promised Land — and cariocas haven’t heard the message from their international peers because they’re yelling on the cell phone. No one dusted the furniture, yet the visitors are at the door. They expect to find the most beautiful people on earth dancing perfectly while giving directions on how to get to Lapa.

Better stock up on samba jam sessions, açaí and frescobol at water’s edge!

It took much less pressure for Ronaldo to have a convulsion during the French World Cup. The horse Baloubet de Rouet shied at the last obstacle of the Olympic gold medal.

The film Rio begins its world run this week and rachets up a sudden world expectation that this is the city worth being in this decade. To spend a weekend facing Copacabana Beach, Obama threw protocol out the window, filled Air Force One with the kids, the mother-in-law, the little wife, and came to confess at the feet of the Christ statue. His opponents went nuts, but Mr. President was flying over the Tijuca Forest. He didn’t give a shit. He said the city was blessed by God, beautiful by nature. Ever since, embracing black Michelle, he sleeps in a Flamengo team shirt.

Meanwhile, in the rest of the world, a bomb threat takes 3,000 tourists off the Eiffel Tower. New York is as tense as ever. Same for Tokyo, with its tremors, same for Rome, with Berlusconi’s boorishness, and there’s no other watering hole to find happiness in peace, a place without the  conformist biases of the old civilizations. The best place in the world is here, and even Al Jazeera, with no shootouts or drug traffickers to put on the news, has closed its offices.

Suddenly, though the streets are unpaved and local men haven’t been taught to keep their flies closed in public, Rio gets the title of most fascinating city from Wallpaper magazine. The metro goes only from here to there, but the gays don’t care. The airports are prehistoric, but — as long as there’s that sexy voice breathing down the public address system– young people are filling up the hostels of Ipanema.

Rio de Janeiro is now a city surrounded by little blue macaws — and the world, all excited over a movie about the experience of man living in harmony with his environment, will put on millions of flowered bermudas to satisfy its curiosity. Could it be true? Or is it that the wars of the Middle East, the tsunamis of Indonesia, and Fidel’s stupidity in Havana provided no alternative?

This was the ends of the earth, and from one moment to the next it has become the best world in existence. City of God, the last cinematic record received by the planet about what was going on, has been deleted. Zé Galinha, Zé Pequeno and all their friends from Cantagalo and Complexo do Alemão lie dead at the hand of [State Public Safety Secretary José Mariano] Beltrame’s civilizing police pacification units.

The gangs left last night and now in the afternoon, the funny [carnival] blocos reign.

No more stray bullets, long live the olive that illuminates the folkloric gourmet food of the five-star botequins.

All this international hope, of running away from problems at home and being happy here, is benign. Come. The problem is  that nature is ready, but deals must still be struck with the local actors, the taxi drivers, the waiters, the salespeople, the public pee-ers, the drugstore delivery boys, etc.

For lack of a good municipal psychoanalitic divan, moral repaving and sanitary education, no one can be cured of this cyclothymia. For lack of civilized driving behavior, this is going to end in a traffic jam. For lack of an airport, these planes will end up at the bottom of the bay.

After Rio, the masses will come in ever more urgent search for a marvelous bean appetizer and they’ll want their money back if these buses keep up their fury, and these children insist juggling balls at traffic lights. The carioca movie is fantastic, no one’s doubting it, but — better stock up on caipirinhas and tambourines for mulatto women! — we’re going to need an usher who keeps us civilized and shows the esteemed audience to the best places in the house.

6 Responses to How the movie Rio affects the real Rio