A year ago, unthinkable

All of a sudden you surprise some ladies standing in front of the Municipal Theater with the gift of your two tickets to a classical music concert, and run off to see a Shakespeareplay at the Complexo do Alemão…

You then find yourself dangling in a spacious gondola, with a breathtaking view. The Complex of favelas is so big it takes six stations to cover it. So big, and a year ago you didn’t really know where it was. About 100,000 people live here, maybe twice your own Ipanema! The Army occupation in November 2010 changed your mental map of the city. Before that, people talked about the cable car system, but it was all very strange. The federal government was building it in the midst of a territory still run by the drug traffic. Run by them for thirty years…

On your return to the Morro do Adeus Station, you bump into a troop of twenty young people at very serious play, creating a theatrical intervention learnt from the French. The Mozart prankster you left behind downtown would have loved it.

Then you watch– in the most awful cold, since Goodbye Hill is in fact on a hill, with a polar wind to boot–  the play Sua Incelença, Ricardo III, staged by a troupe from the state of Rio Grande do Norte. They’ve just given a series of workshops for actor, director, musicians and theater students, all Alemão residents. Young members of a local theater group sit next to you, wearing t-shirts and jeans. They shiver just like you. 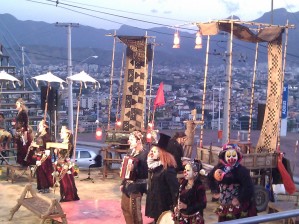 Full house, despite an infernal chill

Last, a blindfolded dancer from Porto Alegre moves with great confidence. She even climbs the wire fence around a soccer field, accompanied (musically) by a local composer. You identify. But she knows the territory like the palm of her hand; she’s done a two-week residence here.

I came face to face with a fear and personal prejudice formed by generalizations about people who live [in favelas]. I took away beautiful images in my memory, I met fabulous people and artists, people who have a great deal of power to transform the precariousness of their reality into creative potential. — Roberta Savian

Switzerland in the Alemão

“Having tourists is a pain,” says Itamar Silva, coordinator of IBASE, the Brazilian Institute of Social and Economic Analysis. “They say we have to get ready for tourism,” he continues. “What do they mean? Cleaning up? Having Perrier on hand?”

Hostels are appearing in favelas with police pacification units. And the middle class goes up the mountain to eat feijoada with a touch of authenticity, much cheaper than in the formal city.

Botafogo, a neighborhood where stray bullets used to rain into the gardens of the City Palace (the mayor’s headquarters), has become a favela gateway. Another map mutation.

Itamar Silva, at the Rede de Pesquisa em Favelas workshop, at the BNDES

Son of a maid and a samba composer, Silva also complains that the folks who climb the hill to get a kick out of the samba de raíz revival end up marginalizing the kind of samba the locals prefer, pagode. And the pacification authorities tend to ban funk music, especially when the words glorify the drug traffic. Silva fears that samba schools will lose their place in carioca culture. It’s getting to the point, he adds, when schools will have a section just for favela residents– who used to save a section for outsiders. 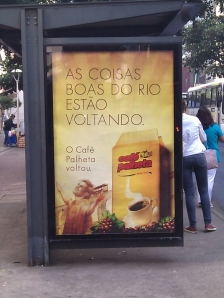 "The good things of Rio are coming back"

Yup, pacification and its ramifications are, as do the Padox, poking holes in the logic of people, barriers, and territories. Silva suggests a kind of protected area in favelas, and to “think about [urban] integration”. Historic preservation? And what of the hilltop resident who wants to make the most of his real estate’s appreciation?

It’s not easy to say what ought to be preserved, who will stay, who arrives and who leaves as soon as possible. Public policy for Rio’s favelas evolved through the decades from removal in the 1970s, to urbanization in the 1990s, and, starting in 2008, urban integration. By 202o, the Morar Carioca program is supposed to upgrade housing and general life quality conditions in all of Rio’s favelas, to the level of all its other neighborhoods. The architects’ drawings are lovely, full of greenery and clean environments.

In 2020, in nine years, who will a favela resident be? How many will be poor, and where will they live? And by 2030? There’s no debate going on about this.

Reality pricks our imaginations. Just as a cultural outing at the Complexo do Alemão was until recently unthinkable, few foresaw that Brazil could become a mostly middle class country.

Favelas were never meant to exist–  that’s why they were ignored for so long. Now that they’re getting attention and investment, they risk becoming mere quaint districts. Is that a bad thing?

While the future gets itself into some kind of shape, a great deal of money is being spent by companies such as Petrobras and Oi, as well as state and municipal governments, so that cariocas from different parts of the city can share experiences and create new partnerships. In August, the state of Rio announced a record investment of US$ 21.6 million equivalent in culture for this year and next. Of this, US$ 263,000 equivalent will go towards the production of music videos, CDs and projects related to the history, communication and circulation of the controversial funk style of music.

This is a positive accessory to the urban mobility we’ve just gained–one which can only strengthen peace and democracy.