Flying Down to Rio: Brain Gain

Some pack a bit of revolution in their bags when they come home. Others are making a getaway from the economic crisis abroad. Many want to contribute to Rio de Janeiro with something they learned elsewhere.

“Our journey began three years ago, when [we] began to imagine a different Rio de Janeiro, where the voices of all citizens would be respected and heard during the decision-making processse that define the city’s future,” says Alessandra Orofino, co-founder of Meu Rio (My Rio), a new digital channel for increased political participation, around issues lacking public debate.

Raised and educated in Rio, Orofino and her school chum Miguel Lago both studied abroad. They decided to return and “…act now because we saw this was a unique moment, when changes that normally would take much longer to occur are unfolding faster,” she explains. “We thought, ‘now or never’!” The nonstop duo convinced former Central Bank president Armínio Fraga to provide seed funding.

For transparency and accountability

Alexandre Fernandes and Ana Ester Rossetto left Santa Catarina for graduate study abroad– in the new fields of eco- and economic innovation. They recently returned to found KCA Consulting, to serve Rio de Janeiro companies interested in the redesign of industrial processes that achieve 100 percent recycling, the “Cradle to Cradle” concept developed by Michael Braungart and William McDonough. “I found the pieces of my puzzle, what I want to do for the rest of my life,” Rossetto revels. The couple sees Petrobras, Casas Bahia, Brastemp and Carrefour as potential clients, capable of implementing reverse logistics such that consumer product and industrial waste don’t end up in Rio’s new landfill site, in Seropédica.

Alexandre Fernandes and Ana Ester Rossetto, back in sunny Rio

A sense of personal mission often provides the unflagging energy needed to overcome the many obstacles to successful readaptation.

The Gain reverts to Drain, at times

Some returnees do get out their suitcases again. “The carioca’s tolerance with the pigsties made out of public spaces, the urban chaos, the noise and power outtages that I never experienced in the four years I lived in the U.S. and that still occur too often,” bring doubts to mind, admits Robson Coccaro, a musician.

Carolina Griggs came to Rio after completing a Columbia University masters in public administration, science and environmental policy, but was quickly disappointed. “If you want to work in government you have to take an exam, but at the same time there are many people working with no qualifications. The model isn’t transparent,” she points out. “In New York they post jobs on sites with the needed qualifications. If you send your resumé and it fits, they interview your twice and you have a job.” It’s time, she adds, to get politicians out of public administration; otherwise, the result is “the absence of integrated planning and poor-quality public service”.

While clientelism and bureaucracy are sources of frustration, there is also welcome progressiveness. Coccaro and his American partner Sean Gibbons returned in part because of the bad U.S. economic situation and in part because of beckoning prospects here for their TocaEvents events design and production company. But they came foremost because otherwise they couldn’t have stayed together. Brazil gives out permanent visas to foreigners in an officially sanctioned same-sex “stable relationship”– while this is still rare in the U.S.

But then come the outrageously high prices. Coccaro is teaching English and music while the company expands and has yet to enjoy the luxury of performing or composing.

Partial consolation, he adds, is that telephones and the internet work much better now, and that cultural life in Rio is booming.

A challenging amalgam of old and new

In the eyes of many returnees, Rio is not the city they left behind years ago. “The improvements in public safety make a big difference in Rio’s economic, social and political life, and prove that it’s always possible to improve public administration, you just have to want to,” says Carolina Griggs, who soon starts a new job– in New York.

“When I left Brazil years ago,” says author Cássia Martins, “the favelas were very different. Today they are accessible to the cariocas, and with the introduction of [police pacification units] many people have been visiting and attending events in the favelas.”

Martins returned quite happily to Rio for a period write a semi-autobiographical novel, Born in Rio.

Joaquim Monteiro’s return wasn’t from any great distance, but the decision to come back to Rio was no small thing. “I was living in São Paulo, working for the largest communications holding company in Latin America, Grupo ABC, and had no intention of returning in the near future,” he recalls.

“One day I got a call from Carlos Roberto Osório, saying he was going to work for the city, taking care of it and preparing it for the [upcoing events]. He asked me to set up the Secretariat for Conservation and Public Services… I’d be trading the certain for the uncertain, earning less and working in an area that was new to me … between working for a huge company or helping turn a city around, I thought the second option more challenging, and that it would be an enormous pleasure to work alongside such competent people who share the dream of turning Rio into the best city in the world to live in.”

Monteiro, who is from a distinguished carioca family, not only took the job as Municipal Undersecretary for Conservation and Public Services, but also helped to found Rio Eu Amo Eu Cuido (Rio I love it I take care of it), an NGO that works to create civic pride. 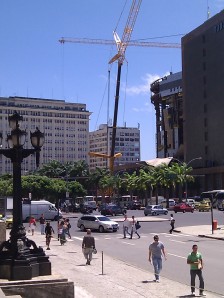 Despite such optimism and excitement, notes education specialist David Letichevsky, Brazil tends to develop in spurts, “like a samba de breque“, a type of samba composed to include abrupt pauses. After twenty years abroad, he came back to work in the municipal school system, armed with a masters in the economics of education from Columbia University. Though he’s decided to leave once more, he offers inspiring advice for anyone considering a return to Rio:

“Bring your critical spirit. Don’t accept things as they are; question, fight, argue. People will slap you in the face, try to trip you up, but don’t let your spirit break. The Brazilian mentality doesn’t much like contestation… it’s very used to patriarchal, rural, slavocrat structures, in a continent-sized country that has little consciousness of its borders. If you not only saw the borders but also passed them, share with your compatriots what’s on the other side– for better and worse.”

1 Response to Flying Down to Rio: Brain Gain