The nitty gritty of pacification 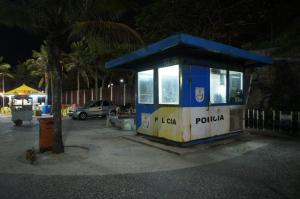 [UPDATE April 4, 2012 — Military police announced yesterday that by Friday, 700 men and women– the same number responsible for the public safety of the Leblon neighborhood– will be patrolling the alleys of Rocinha. Early this morning a patrolling cop was shot dead in one of those alleys, and police are now on a manhunt for his suspected killer, allegedly a drug trafficker. Rocinha’s new commander said the patrols will combine cops from different  units and with different professional experience.]

The day after Rocinha’s police occupation last November, O Globo newspaper announced to the world on its front page that Rocinha é nossa, Rocinha is ours. However, it seems that several other groups are contesting ownership of  the South Zone’s largest and most visible favela, with an estimated population of 200,000.

According to press reports, two drug gangs are fighting over the territory, up for grabs since druglord Nem was arrested in a car trunk, also last November. That’s the explanation for most of the eight murders that have taken place since occupation. Robberies are also on the rise. Such crime hasn’t been seen in other pacified favelas, though there have been problems with police corruption and community relations.

Rocinha doesn’t yet have a UPP, or police pacification unit. Each of the city’s nineteen units have been installed only after a territory is fully in control of the Rio police– certainly not the case here. Given the crime spike, some residents yearn for the return of an iron-fisted druglord.

Yet the state government is far from allowing a return to the past. This week State Public Safety Secretary José Mariano Beltrame announced that 130 new recruits will intern in Rocinha, bringing more manpower to an additional 40-man contingent and swelling the total force there to 350. Most are meant to carry out foot patrols in the favela’s alleyways.

But the Rio police might do well to extend to Rocinha the level of technological intelligence and coordination reportedly now being utilized in Complexo to Alemão, another troublesome territory. Only last week did the military police begin taking over Alemão from the Brazilian Army, which back in November 2010 had invaded the complex of favelas, in response to a series of vehicle torchings that terrorized the city.

There are already some cameras installed in Rocinha. Even better intelligence –and possibly, intelligence sharing– could help nail what this week’s Veja newsmagazine says is the real reason why Rocinha still isn’t “ours”:

A document produced by the Civil Police Intelligence Unit, dated February 15 of this year, is as succinct as it is shocking in its revelations. In the hands of the Rio Secretariat of Public Safety, which is investigating its contents, the dossier raises suspicions that once again, police are collaborating with criminals in exchange for a substantial “tip”. Item four of the ten-topic, two-page report, to which Veja had access, provides the probable sums. The “down payment” is said to be 200,000 reais (almost 120,000 dollars equivalent). And the monthly payments to military police, according to the document, come to 80,000 reais. In exchange for this, the police are said to be staying out of the alleyways, and keeping watch only over the larger byways that cut across the favela.

Tensions between Rio’s civil (intelligence) police and its military (patrolling) police are reportedly running high, as one might imagine, given what Veja published.

As long ago as the 1990s, when anthropologist Luiz Eduardo Soares was in Beltrame’s job, during Governor Anthony Garotinho’s first term, it was clear that having more than one police force is problematic. In addition to the state-wide military and civil police forces, the city of Rio also has traffic police (CET), and a Municipal Guard. The state of Rio also has highway police and then there is Brazil’s FBI, the Federal Police. Oh, don’t forget the forest police (who have helped out with occupation).

In 2009, Beltrame created Integrated Public Safety Regions, or RISPs, by way of the Portuguese acronym. These have been instrumental in bringing down crime, since the state is now divided up into regions in which civil and military police units are jointly responsible for crime reduction goals.

This year the military police force also instituted a new police academy curriculum, with a focus on reduced police corruption and violence.

Some security and police experts say the RISPs aren’t enough to foster true coordination, planning and evaluation– i.e. effective policing. They suggest more radical institutional change. What happens next in Rocinha may determine how necessary that is.

And Rocinha constitutes only one of several enormous territorial challenges facing security officials. In addition to the ongoing military police handover of Alemão, Complexo da Maré, Jacarezinho and Manguinhos are high on Beltrame’s to-do list.