When RioRealblog was created in August 2010 to cover the transformation of Rio de Janeiro, it was impossible to gauge just how large this task would become. And we’re still four years away from the Olympics…

An enormous amount of activity and debate is occurring– more than even a single mainstream news vehicle is able to cover. So, in the absence of a full blog staff, here’s an illustrated one-woman roundup of just some of what’s happening nowadays in this ever more vibrant, hectic city. 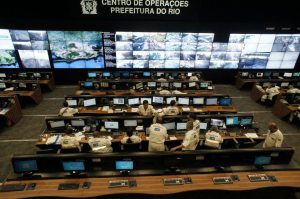 City agencies work together at the Operations Center, but the police-- state entities-- aren't part of the team

A late March visit to the new Operations Center in Cidade Nova turned up the news that the Rio police are building their own security operations center a kilometer away, set to open in June. And the reason why we haven’t heard much about exploding manhole covers lately? For the last six months, the city has been enforcing the requirement that utility concessions have municipal authorization to dig. City hall now has just about every water, electricity, cable tv, gas and telephone excavation mapped and under surveillance.

It's not just about winning the game 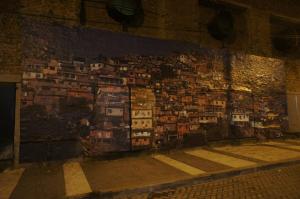 "A Port for Citizenship"

Young people armed with cameras, under the guidance of Morro da Providência photographer Maurício Hora, have been tromping around construction sites in the port area and came up with marvelous documentation of a moment that will soon be lost to history. Their work, pasted up billboard-style inside and outside an old port warehouse building, can be seen until April 30.

In early April, prize-winning Zaha Hadid and other visiting architects called on Rio to produce an Olympic legacy. Mayor Eduardo Paes later told RioRealblog he and Hadid discussed something he calls “working architecture”, whereby, for example, a swimming facility won’t become a white elephant. Instead, it will turn into a library for a nearby favela.

Meanwhile, the Comitê  Popular Copa e Olimpíadas Rio held a long meeting in an abandoned government building taken over by squatters right behind the city council building, to plan activities protesting various aspects of megaevent preparations. Mostly university students, they’ll organize a debate this coming week on human rights violations. They also discussed the future of the Maracanã Stadium, now being rebuilt by the state government. The bidding process for the stadium concession has begun, and so far only one company, owned by Rio energy/mining magnate and philanthropist Eike Batista, has shown serious interest. Small world.

Education in Rio: a long way to go

Municipal Education Secretary Claudia Costin and education specialist Simon Schwartzman discussed classroom gains and challenges at another OsteRio debate. The focus is on Portuguese and math. It’s not for nothing that earlier debates, on the city’s investment promotion agency’s RioNegócios work; and on the development  of the state’s offshore oil and gas potential, ended up lamenting manpower shortages due to education shortfalls.

Sérgio Magalhães, president of the Rio chapter of the Brazilian Architects Institute

Rio’s city services are dangerously overextended and investment is too concentrated in the West Zone, architect Sérgio Magalhães told RioRealblog in an interview. The North Zone and downtown should get more attention. Magalhães conceived and implemented the Favela-Bairro precursor to the current Morar Carioca favela upgrade program, as municipal housing secretary in the 1990s. He also ran the 2010 Morar Carioca architectural contest, which chose forty winning projects. These have been on hold for more than a year, but Magalhães says the delay is due to administrative overload and that city housing secretary Jorge Bittar told him two weeks ago that they’ll soon get the green light.

He also posited that the rough treatment that favela residents receive during the relocation process is a reflection of a negative middle-class attitude towards favelas with roots in the 1980s, when the informal city came to represent violence and crime. Government housing alternatives give short shrift to a strong culture of community. Favelas represent six percent of the territory of the city of Rio de Janeiro proper, housing twenty percent of the population.

Last but not least, Magalhães said that a full seventy percent of Rio’s  twelve million population don’t have adequate sanitation…

For the first time ever, cariocas everywhere point out, the city is facing deadlines. City Conservation Secretary Carlos Roberto Osório is only one administrator who feels the crunch. “He doesn’t sleep,” his undersecretary Joaquim Monteiro said at a monument unveiling Friday afternoon, that followed on the heels of a meeting with trashpickers at the soon-to-be closed Gramacho dump and the inauguration of a beach volleyball court in Batan, a pacified West Zone favela. “I haven’t had lunch,” grumbled an assistant. 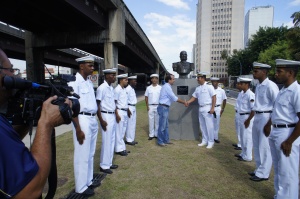 The city is restoring long-warehoused monuments that recall moments of glorious history; the overpass to the left is scheduled for removal

“Yes I do, I need to sleep,” Osório laughed early Saturday morning at the Favela da Mineira, where an army of yellow-gloved sanitation workers, sailors, marines, city health agents, community leaders, and volunteers picked up trash. TV Globo featured the effort– first in a planned series– on the lunchtime local news program. Amid the sweltering throng there was a noticeable lack of local resident volunteers. “This is just the beginning. They’ve been ignored for so long, had so little access to city services,” said a state social assistance and human rights official. “You can understand why they might not participate.” 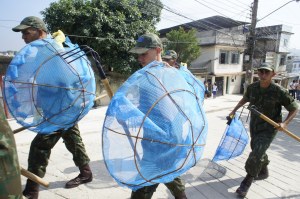 From swords into ploughshares, sort of

How much can a city change? So many people are losing sleep  to change it. Yet participation is limited, as this week’s Veja Rio magazine makes evident in a report on a new municipal goals plan partly drafted by 150 notables. None of them are favela residents.