Cities and democracy in Paraty: the literary festival 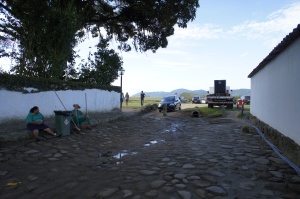 Urban problems even at the literary festival in Paraty

Those born before the year 2000 know that in the grand scheme of human history, the twentieth century was the century of cities, as debate mediator Guilherme Wisnik said yesterday at the Paraty Literary Festival.

Born in India, Mehta emigrated to New York with his family in the 1970s. Some twenty years later he returned with wife and children to his homeland, bent on discovering if it’s possible to go home. The result of this experience was the highly praised book Maximum City: Bombay Lost and Found, published last year in Brazil.

He said that Bombay is a city both brutal and welcoming. Sound familiar?

On the one hand, Suketo hears the story of a Muslim who torched a Hindu  from whom he used to buy bread– “because he was Hindu”. On the other, he listens to the chief of the urban train system, who says a more comfortable form of transportation won’t come into being during his lifetime, yet keeps his faith in human beings. The reason? Every day he witnesses the solidarity of squeezed and sweaty passengers who reach out hands to an unknown latecomer, making space out of nothing for one more person.

According to Da Matta, the future of the world is to be found in cities such as Rio de Janeiro and Bombay (the name of which comes from Portuguese, by the way: Boa Baía, or Good Harbor).  With all their warts and wonders, these cities are taking their places on the world map, while American and European cities founder.

Cities and Democracy, in the Authors’ Tent

In his city of Niterói across the bay from Rio de Janeiro, Da Matta says he feels like crying when he sees the beach of his childhood. But metropolitan Rio de Janeiro manages to produce the paradox of intense pollution along with a U.N. world conference on sustainability, he noted. The city, he said, is so multi-faceted that it seems like an Indian god, with zillions of arms and heads.

What’s the role of the favela? was a question for Mehta. In December, he visited several Rio de Janeiro favelas, pacified and unpacified.

“I went to a baile funk in Maré, which isn’t pacified. I heard songs about copkillers and underage sex. I saw kids carrying AK47s bigger than them. I saw people selling cocaine in the street, from trash bags. Then I went to a jazz club in a pacified favela, where there was a kind of tamed jazz, and people from Leblon who liked the idea of being in a place that’s a little dangerous. This is the future of the favela,” he pointed out.

“Once a Jewish friend took her grandmother to her new apartment, all fixed up, remodeled, in New York’s Lower East Side”, he went on. “Her grandmother was horrified. ‘I spent half of my life trying to get out of here!’ she exclaimed”.

The other side of this coin, Mehta added, is public housing. “The architects are insane and deaf,” he lamented. “They don’t listen to the residents, the buildings are monochromatic series of blocks.”

In the cacophony of Bombay, Mehta discovered that you can’t go home. But he came to understand that much of a grand city’s sparkle derives from the fact that so many of its residents are outsiders. Showing a scene from the 1950s Bollywood movie Bombay My Love to the festival public, he explained that the pickpocket’s song portrays a skeptical view of the city, the ambiguous relationship between migrant and city. “If you are a newcomer, you have to make it by hook or crook,” he said.

Which is what Mehta did in the two and a half years he lived in Bombay. Today he feels at home in several of the world’s great cities, but has returned to New York, where he teaches journalism at New York University. At the moment he’s writing a book about the immigrant experience in the Big Apple.

If the twentieth century was the century of urban expansion, maybe the twenty-first will be the century of urban sustainability, the moment for facing up to scenes such as that of the photo at the top of this post. “I remember eating crabs from this mangrove swamp just in front here,” says Regina Rita Peres Goulart, a pousada (inn) owner.  “Now, my neighbors, fancy restaurants, allow their sewage to run out into the street. So much needs doing.”

On Wednesday July 11, Suketu Mehta will participate in a presentation at the FLUPP in the Morro do Cantagalo, Espaço Criança Esperança, 3 p.m.

4 Responses to Cities and democracy in Paraty: the literary festival