Where is Morar Carioca?

If you are one of this city’s 1.4 million (22% of the population) who live in a favela, if you work as an architect, urbanist or social scientist, or are simply a concerned carioca, now may well be the perfect moment to paint some new protest banners and get out on the streets to march.

Morar Carioca (Carioca Living), the favela upgrade program hailed only three years ago as a key social legacy of the Olympic Games –and which mobilized scores of architectural firms in a project contest held by the Brazilian Institute of Architects — was meant to bring the city’s favelas up to standard by 2020.  In January 2011, mayor Eduardo Paes happily announced that work would begin in March of that year. Yet not much has happened, except for some scattered projects.

When asked, government officials, who still include Morar Carioca in their Olympics and other presentations, say the program has met with unexpected difficulty but will soon get under way.

The program was to have taken Rio’s pioneering 1990s favela urbanization approach, Favela Bairro, one giant step further. Based on a philosophy of urban equality, it would have focused on integrating Rio’s informal and formal territories, and could have shown the way for urban integration efforts around the world.

To succeed, it would have to have developed effective community participation strategies. So far, most of the city’s transformation has taken place from the top down, suggesting that all those concerned face difficulty in listening to, organizing, articulating and negotiating needs.

The house on the right collapsed. Will hers, on the left, be next?

For almost three years, since the contest results were announced in December 2010, the question has been posed: Where is Morar Carioca? Forty teams were selected, most of which still await a call to action.

Over time, the answers have changed. Initially, the delay had something to do with contracts, the bane of Rio’s transformation. Then it was murmured that the city, having spent millions on infrastructure and having failed to create private-sector housing-related incentives, had run out of funds and was looking to the federal government.

Now, a City Hall source concludes, the problem is political: the municipal housing secretariat, SMH, is run by a Worker’s Party (PT) member, Pierre Batista. That was fine, given the city’s governing PT-PMDB alliance — until the PT decided to field a candidate of its own in the October 2014 gubernatorial contest. Senator Lindbergh Farias plans to run against the mayor’s PMDB party’s candidate, Luiz Fernando “Pezão” de Souza.

If Morar Carioca were to move forward now, credit for any success would go to the PT, instead of Mayor Paes’ PMDB. Thus, the source says, Morar Carioca is once again put off, at least until after the election.

A never-ending stench amid new homes, in Manguinhos, behind the world-class library

In the absence of an urban revolution, City Hall is counting on good old public works to please its citizens. Under the aegis of the municipal public works secretariat, SMO, over US$ 900,000 equivalent are being spent on the Bairro Maravilha program in the North and West Zones, which, after decades of neglect, do need their own upgrades. In addition, the City Hall source says, Mayor Paes has been meeting with residents of many neighborhoods, jotting down their needs, and pushing his secretaries to attend to them. TV Globo’s noon news program seems to be on board with this approach, as reporters point out a variety of problems across the city, talk to residents, set up deadlines and pressure those responsible.

“It’s all done without any planning,” the source pointed out.

And, in the absence of Morar Carioca, mobility will surely be Rio’s Olympic legacy, with Mayor Paes’ new dedicated bus lanes connecting the West Zone to the rest of the city, better-organized bus service and the virtual extinction of the largely informal (and to a great extent run by paramilitary groups) van transportation service. This is an admirable achievement, and, in addition to the state government’s extension of the Metro’s Line 4, will truly change the face of Rio de Janeiro. It also poses new challenges, such as the need to integrate the Metro with the existing Supervia train service and keep growth in the West Zone to a minimum.

Condemned homes in Manguinhos, where people still live, despite the danger

The absence of Morar  Carioca also means that many of those 1.4 million favela residents continue to live in dreadful conditions. The public policy challenges of improving their lives are daunting and explain much of the slow pace, both at the municipal and state levels of government. But a visit to the alleys and rubble-strewn lots of the North Zone Manguinhos favela complex, is such a stinky, devastating experience that it’s impossible not to conclude that its official 55,000 residents are still simply off the map.

And this is a pacified favela where federal funds have allowed the state government to build a fabulous library and to hire world-renowned architect Jorge Jauregui to design a project to raise the train tracks and create a linear park.

According to people who have been working on the upgrade in that area, the lack of coordination between state and city government agencies, difficult negotiations with residents to be relocated, plus tragic sewage and water supply conditions, have led to a situation where the park is unfinished, nails have been stolen from faux-wood planking, sewage flows out of manholes and has taken over local streams, residents remain in condemned homes with cracked and crooked walls, and water pipes leak enormous amounts of water more often than not.

CEDAE water pipes, quite a contrast to…

…the square in front of library and affordable housing, where a fountain has been destroyed and the tower supplies local water, some days

In addition, efforts to transfer residents’ at-home commercial enterprises to ready-made kiosks near and under the train tracks have not wholly met with success, despite a training program. Ownership and maintenance issues have arisen. Though each kiosk was meant to sell something different, they all sell the same products, including beer, which is illegal. “Social integration cannot be built,” notes a person who has been involved in work going on in Manguinhos. “This is a big question in all these projects. You don’t make social change by way of infrastructural change”.

This was the exact conclusion that planners and urbanists drew from the Favela Bairro experience. It was social integration that Morar Carioca was supposed to address.

The Manguinhos area is perhaps less hellish for most than before its pacification in January 2013, (though residents claim pacification police killed a helpless 18-year-old ten days ago), but so much is still lacking, particularly in the realm of water and sewage. 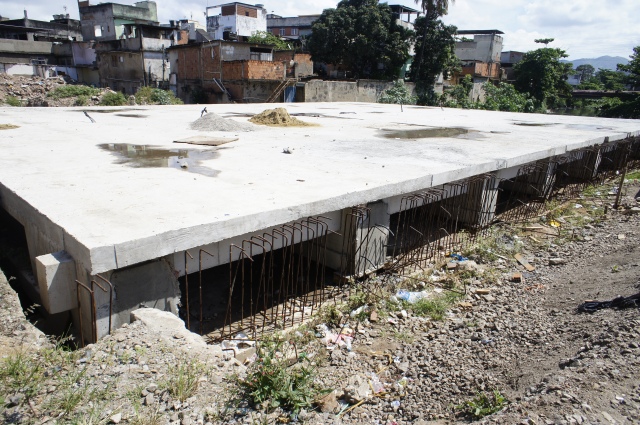 Underneath this new concrete, raw sewage

CEDAE, the state water and sewage concession, will only come under Agenersa‘s regulatory scrutiny in 2015. This past week, much of the city of Rio was without running water; only 30% of all sewage is properly collected and treated. The state government has just proudly announced that it will clean up a number of Rio beaches, but in fact this merely involves collecting additional sewage and sending it out to sea.

Clearly, both for favela and non-favela residents, the concession is yet another “black box” that demands attention; the digital activism group Meu Rio is working on this.

Meanwhile, Where is Morar Carioca? The drawings were so beautiful; the reality so ugly and demeaning. The program was included in the mayor’s Strategic Plan, early this year, but the selected architects — and thousands of favela residents — are still waiting.

Politicians, presumably under pressure from the Olympic Committee and FIFA to reduce street violence, worried about their political careers, are paying better attention to many demands. And, while the “Where’s Amarildo?” campaign hasn’t turned up his body, it did unleash perhaps the most sweeping and efficient police inquiry into a favela death ever seen in Rio.

According to the City Hall source, mayor Paes has put a halt to virtually all removals, to avoid demonstrations (maybe this is why people in Manguinhos are living in condemned homes).

So it might just be a good time to remind him, peacefully, to fulfill his promise for suitable living quarters for everyone in Rio de Janeiro.

7 Responses to Where is Morar Carioca?