Will Rio sink along with Petrobras? 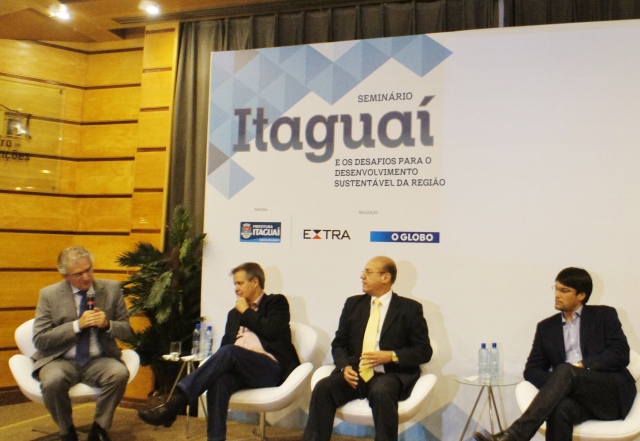 The region that was counting on oil: one day, the mayor of Itaguaí (last on the right) participates in a seminar in downtown Rio. Soon after, he’s the subject of a Federal Police investigation

It’s just the start. But — maybe — the crisis can at least partly save us from future petroleum curses.

“Chemtech, a company located at the UFRJ technology park at the Ilha do Fundão and part of the Siemens group, has already laid off 720 engineers,” columnist Miriam Leitão wrote in O Globo newspaper last week.

According to O Globo, the petroleum sector produces almost 30% of Rio de Janeiro state’s GDP and 60% of investments planned for the 2014-2016 period. Sunday, the paper published an overview of the effects of the crisis on the national and state economies, and on the oil rich cities of Macaé and Itaboraí.

We’ll certainly experience a significant drop in state economic activity, partially offset by 2016 Olympic Games investments and construction, and by the consumer spending of those who recently left poverty.

In one of the Globo pieces, state Economic Development Secretary Júlio Bueno spoke frankly. “‘We’re going through a crisis and this will affect Rio. Daily, companies come to me seeking help. We try to contact Petrobras. There’s no way. Initially, we’ll have problems, layoffs,’ says Bueno, who expects the company to bounce back quickly.”

Everything was going so well. In June, the president of the national development bank, the BNDES painted a rosy future for the state of Rio.

“There’s a massive volume (of investment), concentrated in Rio de Janeiro … So along the entire coastal area there’ll be opportunities to develop important complexes — ports, logistics, equipment production,” Luciano Coutinho was quoted as saying, in the site G1 only six months ago.

In 2012, Petrobras had determined it would buy the Military Police headquarters, downtown, to put up a second office building (but the police — and their horses — are still there). The company has long spent lavishly to support concerts, theater and film, as well as the marvelous favela youth project, Agência de Redes para Juventude.

The energy sector’s first tremor hit Eike Batista’s X companies. His “fall” marked not only the national and state economies, but the face of the city. The Rodrigo de Freitas lagoon, which Eike had cleaned up, is losing its gleam, despite the attraction of the floating Christmas tree sponsored by the Bradesco bank. The Hotel Glória, which Eike was going to remodel in time for the Olympics, saw work halt for a long time, leaving a blank space in the neighborhood.

Then came the drop in oil prices and Operação Lava-Jato, a Federal Police investigation begun in March of this year, which has paralyzed not only Petrobras, but the oil business overall and even the selection of new ministers for President Dilma Rousseff’s second term, which starts in just a few days.

The situation is reminiscent of London, which was in the midst of an economic boom when chose to host the 2012 Olympics. And then came the 2008 crisis…

Brazil’s most important builders are involved in the Petrobras construction cartel and executives’ bribery for contracts scandal, in which part of the money is said to have gone into politicians’ and political parties’ budgets. Many of the accused companies are involved in Rio de Janeiro’s most important projects, such as the Metrô Line Four extension, the Olympic Park, and the revitalization of the SuperVia commuter trains.

There is resistance to the idea of taking Operação Lava-Jato to all of its final consequences, according to at least one columnist. Some government officials have said that if the construction companies were taken to court and punished for the corruption they’re being accused of, Brazil would come to a halt. It really is hard to imagine Rio’s construction sites at a standstill. (Up to now, no one has officially mentioned the possibility of opening the construction market to foreign builders. Brazilian companies have dominated the market since Brasília was built, in the late fifties.)

Such works aside, the city and the metropolitan region are already feeling the effects of the crisis. It’s frightening to consider what will happen with the ongoing port area revitalization, for example, where new commercial buildings will significantly increase the city’s available office space. For a time, we may well have a nicely expanded urban center  — with not much vitality.

Says O Globo: “In the Rio office space rental market, oil companies are downsizing or opting for buildings with lower rents, says Ricardo Varella, vice president of the Colliers consulting firm, in Rio: ‘The oil and gas sector accounts for half the rental office space in Rio. About 10% of this group have already renegotiated contracts, bringing prices down by 20%.'”

Paychecks are also shrinking, according to the newspaper’s report, by up to 40%.

The impact on state government revenues may affect expenditures, a worrisome prospect at a time when increased spending is expected (and needed) on items such as public safety.

For those who are losing income and/or jobs, the situation is pretty depressing. It’s worth keeping in mind, however, that inequality in the state did not improve at the same rate as seen in the Southeast region overall, in the last several years, because relatively high oil and gas salaries skewed the Gini index. Perhaps we’ll see some realignment here, depending on the ripple effects of the crisis.

For those who feel that renewable energy sources have a brighter future than petroleum, the oil slowdown could be good news, if the Brazilian government can figure out how to make the most of this opportunity.

And there’s another possible positive effect: with fewer petrorreais flowing in both national and state economies, we might just see fewer surreal situations such as the one that RioRealblog recently experienced: an upbeat speech, at a seminar on the city of Itaguaí (part of the metropolitan region), which receives plentiful oil royalties and boasts a port used by Petrobras, by mayor Luciano Mota — who days later was featured in news reports of a Federal Police investigation of his allegedly pocketing a third of the city’s monthly revenue, of US$ 34 million equivalent.