Barriers to public transportation flout right to the city 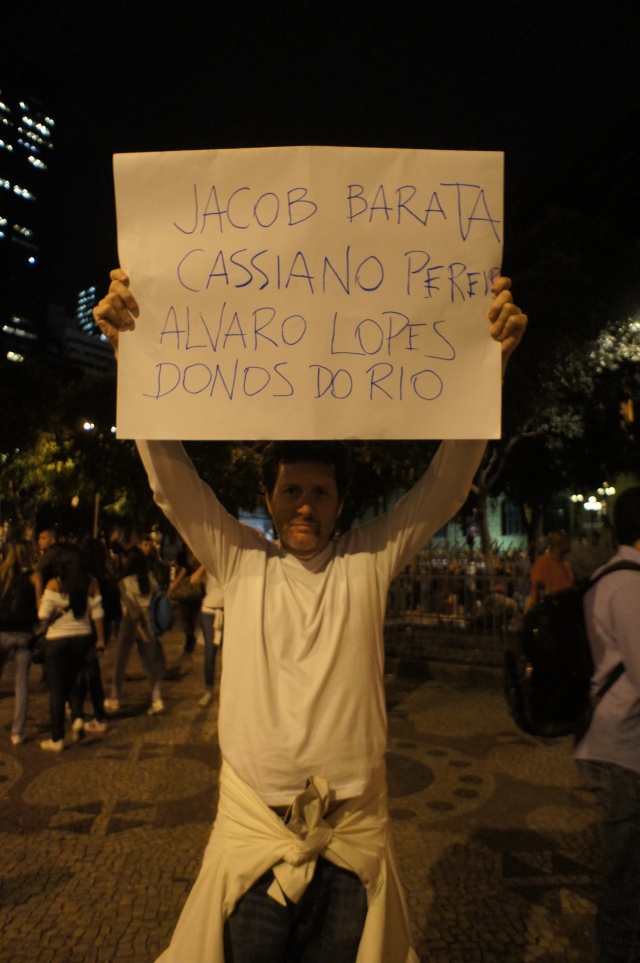 If you don’t ride buses, turn to the next person  — at work, in the supermarket, in your kitchen — and ask how life is, through the turnstile.

At bus stops, note the lost expressions, the useless waving hands. The shrugged shoulder. Almost no one understands what Rio de Janeiro’s “bus rationalizaton” is about. Almost everyone is at its mercy.

Passengers say the changes (modified, extinguished and shortened routes) affecting dozens of bus lines, part of a city effort to reduce the number of buses in the street by 35%, have increased commutes and costs. For many, it’s become more difficult to get to work and school, to make the most of all that Rio de Janeiro has to offer. The average commute in Rio tops the ranking of all Brazilian cities, even São Paulo, home to twice as many people.

Bus rationalization is part of many recent changes in the transportation sector, including the removal of the Perimetral elevated highway, the extension of the Metrô to Barra da Tijuca, the construction of four BRT lines, a new downtown VLT, the widening of the Joá elevated highway, the new Transolímpica express corridor and the slow modernization of the SuperVia trains and stations and of the ferries between Rio and Niterói. A full impact evaluation of all this will only be possible once the work is complete. The fact, however, that buses are Rio’s main public transportation mode brings to the fore the widespread gripes over rationalization.

The famous Los Angeles Watts riots, which went on for six days in 1965, can be traced, among other factors, to a lack of public transportation for the city’s poor black residents. The Governor’s Commission report on the riots found that “transportation agencies “handicap[ped minority residents] in seeking and holding jobs, attending schools, shopping, and fulfilling other needs, and that the inadequate and prohibitively expensive bus service contributed to the isolation that led to the civil unrest in Watts.”

Thirty-four people died, property damage came to US$ 40 million and 4,000 California National Guard soldiers were called in, to quell the Watts riots.

According to activists, Los Angeles public transportation only improved in the 1990s, due to a 1996 court decision on a class action suit brought by a coalition of grassroots organizations, on behalf of residents who depended on public transportation for their basic needs. The decision forced the Los Angeles Metropolitan Transit Authority to spend more than US$ 2 billion to reduce overcrowding, lower fares and improve mobility across the county.

One of the main actors in the case, still active today in L.A., is the Bus Riders Union. New York has its Straphangers; Boston, the T Riders Union.

Here in Rio de Janeiro we have the Associação de Defesa dos Usuários de Transportes no Estado do Rio de Janeiro, the Fórum de Mobilidade do Clube de Engenharia and a variety of bloggers, Twitter accounts e public transportation aficionados. There is also a new movement, #QueroMeuOnibusDeVolta (I Want My Bus Back), which has scheduled a demonstration April 28 in front of the City Council building.

This movement wants city Transportation Secretary Rafael Picciani to come to the City Council and listen to citizen complaints. Twice, the Council has called on him to do so and twice he hasn’t shown up or sent a representative, according to movement leader Luciana Malta. She notes that Picciani did speak with taxi drivers unhappy with the Uber app, but has yet to converse with cariocas about the bus line rationalization plan.

The movement’s demands include, in order of importance, reversion to the old bus lines, lower fares, air conditioning in all buses, a return to buses manned by a driver and a fare taker (many lines now require the driver to take fares) and a fully renewed bus fleet.

In Rio we also have the state Attorney General’s office.

Last month, the state AG tried to reverse the racionalization. A state court decision is expected any moment on an appeal by the AG, which states that “without correct methodology (‘an origin-destination study’), public consultation, a positive user cost-benefit ratio and efficiency monitoring, what we will have is constant consumer indignation and continuous system instability.”

This week we did have a court decision against a city appeal, ordering that all buses must be air-conditioned. This is not much, when compared to other demands.

In Brazil, the 2001 Statute of the City provides citizens with a “guarantee to the right to sustainable cities, this being understood as the right to urban land, housing, environmental sanitation, urban infrastructure, transportation and public services, work and leisure, for current and future generations.” It specifies a guarantee to transportation that is “suitable to the interests and needs of the population and local characteristics.”

Rio isn’t Watts, we’re in the midst of high political tension across the country, and the current mayor’s term ends in December. No one knows how likely compliance with the Statute of the City will be. Will pressure on the city Transportation Secretariat, from citizens and the Attorney General’s office, ever result in anything close to what came of the Los Angeles 1996 class action suit?

Bus companies here are privately-owned concessions, governed by city contracts. We lack sufficient information on monitoring, studies, results, adjustments. The secretary, mayor and the bus companies’ federation communicate very little with passengers about the rationalization. Information about the changes isn’t even available at bus stops.

This blogger wrote about the same subject in the last post and may write more, as the subject gains clarity. Interviews with City Hall (interview request unanswered) and the bus companies (request redirected to City Hall) are still missing. For the time being, with only one side of the story, the unfortunate and most seductive conclusion available is that rationalization was implemented to benefit the companies, South Zone traffic and motorists in general, to the detriment of bus passengers.

Here is a list of bus lines showing changes– in many cases more useful than the official site. Google Maps has just announced that its maps now show real time bus locations, but this blogger was only able to find the stops, with old bus line information.