Looking inward in Rio: anybody home? 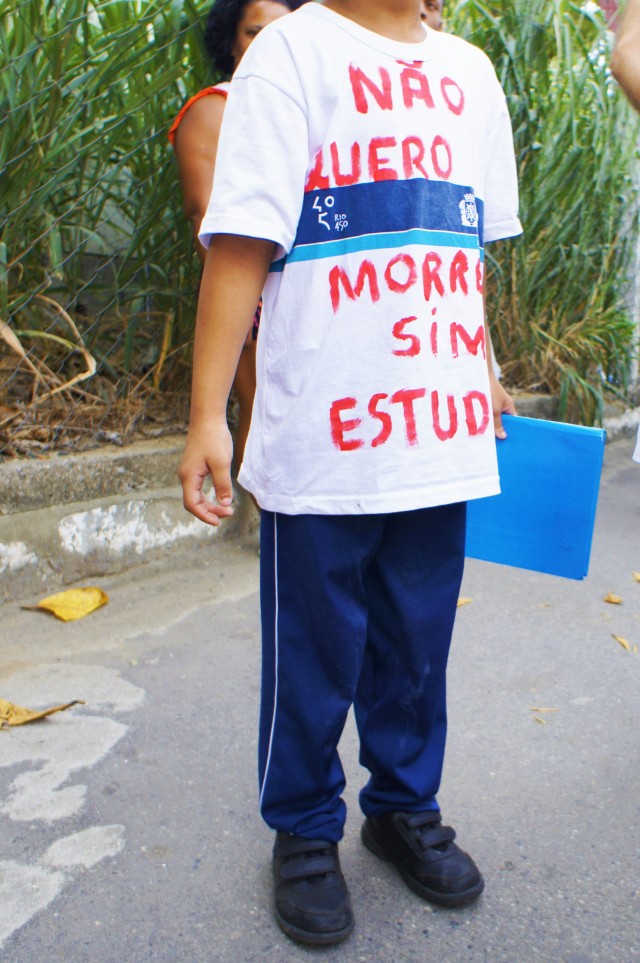 A young Alemão resident, on the near-daily shooting: I don’t want to die, I want to go to school

Rio’s plan, in hosting the Olympics, was to get the city on the world stage, attracting tourism and investment. We’d compete with other metropolises, brand ourselves.

In the process, we forgot to take a good look at the product itself. With almost no effort, Rio stands out from most cities around the world. Who else has scenery and a percussive cultural mix like ours?

Members of the state legislature hears about new plans for metropolitan Rio, which might at last lead to adequate sanitation and transportation

Construction workers, who had depended on the metro-region Comperj refinery construction, are angry at the sudden and lasting loss of income

The focus on marketing — instead of our reality — is why many locals aren’t exactly psyched for the Olympic Games.

One out of five residents in Rio proper lives in informal (mostly favela) housing.

Though maybe the Rio legacy isn’t odd at all, given the Lava Jato corruption investigations, which have revealed construction companies’ powerful economic and political roles in Brazil. They’ve not only built the West Zone real estate developments, the dedicated bus lanes and the metro extension; they are concessionaires for Rio’s subway, trains, ferries and the VLT trams. Just how much these troubled companies will be able to invest in the concessions, if only for maintenance, is unknown.

Jobless workers ready for their protest later, inside the state legislature

Rio’s avowed transportation legacy failed to take in the macro picture of metropolitan needs, including trains, the metro and ferries. The creation of dedicated articulated bus and tram lines and the metro extension dealt with only part of that picture. Rio still lacks full fare integration, cost transparency and metropolitan planning.We don’t even have a map showing the public transportation gamut.

Given the governmental aversion to reality, it should come as no surprise that we’ve got a fair share of disillusionment, grumbling and downright anger. Rio citizens, whose expectations rose during the city’s 2009-2013 turnaround, today point to what they say still needs politicians’ attention, post-mega-events.

Earlier this month, workers from the aborted Comperj federal petroleum refinery project attended a state legislature session on the Supreme Court-mandated Metropolitan Integration Chamber. As federal funds for the refinery ran out last year, the Rio metropolitan-area city of Itaboraí, once booming, turned into a ghost town. At the session, union leaders complained that workers have turned to crime and begging, that they lack resources to buy needed medicines.

Alemão residents, Olympic “torches” in hand, march with a coffin full of names to remember the dead since 2014

Six years ago, at the time of a groundbreaking 2010 military occupation of the North Zone agglomeration of favelas called Complexo do Alemão, a newspaper proclaimed that Rio’s soul had been washed clean. Today, young leaders decry unacceptable levels of violence there. This past Saturday, favela activists filled a cardboard coffin with the names of residents and police whose lives ended with a bullet since 2014, and marched a couple of kilometers up the Avenida Itaóca, to the Estrada do Itararé as far as the entrance to the Grota section of Alemão. More journalists participated than anyone else; the leaders said one reason was that residents were stuck at home because of shooting; the vaunted cable car system (formerly a concession held by the troubled Odebrecht construction firm, now run by a little-known group also involved in the Lava Jato investigation) was at a standstill.

Public safety, after improving between 2010 and 2013, has once again become a key issue, both in favelas and in formal parts of the city. Monday’s Globo reports that current mayor Eduardo Paes would like to be elected governor in 2018, so as to take on this responsibility. As this blogger’s tale of public safety policy gone wrong indicates, easier said than done.

Happier times in Copacabana, 17 days before the Games begin

One hopes that by 2018 whoever is elected will easily pay our police force, with state finances no longer “calamitous”, as acting governor Francisco Dornelles has termed them. Mayor Paes boasts that the city budget is in much better shape than Rio state. Still, municipal debt has increased while revenues are down, a new independent study shows. Meanwhile, Paes has asked the national development bank, the BNDES, for a R$800 million loan, with no clear spending objective. According to one report, the funds are to make up for local spending that occurred because Brasília failed to help out on Olympic costs, as promised. 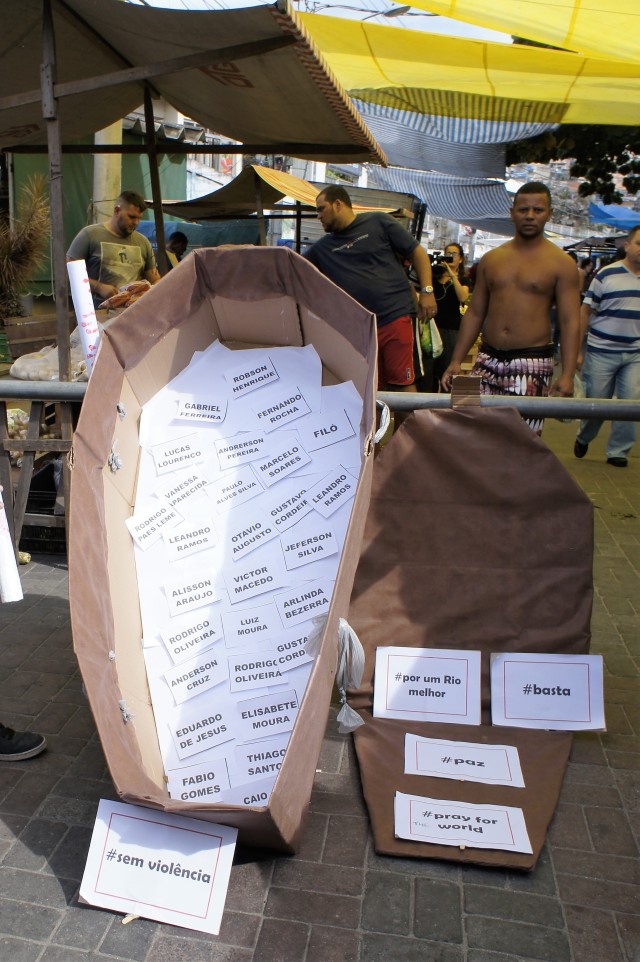 The coffin,  at the Saturday outdoor market at the Grota entrance to Alemão, where many fatal confrontations have taken place

It’s also to be hoped that once the curtains close on the Olympics and we turn to the October municipal elections, we’re able to look inward and get to work on so much that demands improvement. Next week, Casa Fluminense launches its Agenda Rio 2017, a portfolio of priorities for those who’ll be elected in metropolitan Rio.  All are welcome: July 26, 5 p.m., Teatro Rival, close to Cinelândia.