Is there any sense to be made, in Rio?

Or anywhere at all? 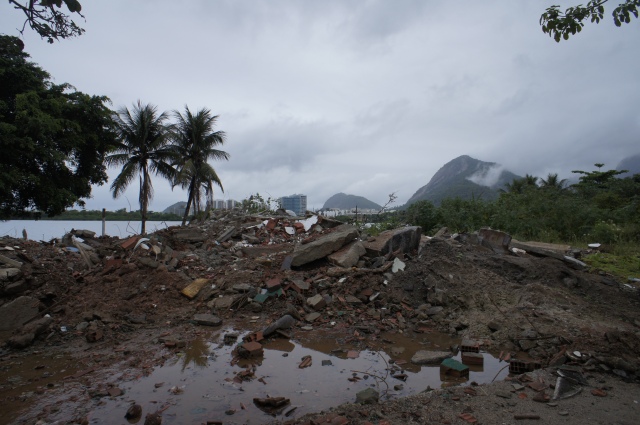 Alleged kickbacks on construction contracts: part of a mega-event package that destroyed the homes of thousands of Rio’s poor. This was Vila Autódromo, next to the Olympic Park

Rio Facebook users spent a day last week invoking a meteor: not clear if they wanted it to fall on the Marvelous City or its successor as capital, Brasília. Of course there are space objects big enough to hit both cities, all of Brazil or even wipe out the entire planet.

Perhaps it’s easier to contemplate the end of days than to sort through all that’s taking place in government and in the streets, interconnected at local, state and federal levels. Along with, no less, the news from Syria, the United States, UK, Italy, France and the Philippines…

If 1968 was the year of “Power to the People”, 2016 may be seen later as the year of “Tough Digestion”. It took about twenty years for youth almost everywhere to challenge social institutions that WW II had already begun to shake up. And it’s taken about twenty years for people of all ages to rise up over the hardships of life in a globalized world of technology-based communication and connection.

Though 1968 represented, in hindsight, progress, for many of us 2016 seems to have brought a reversal of values and priorities.

One hopes not for a meteor, but some sort of hiccup that will get us back on track. Or that 2016 is a hiccup; human history is, after all, a story of ever greater exchange. Digestion must occur, however fibrous and gassy the contents of the Internet.

In Brazil, the year 2013 must also go down in what could be called the Gregorian Calendar Hall of Fame, along with 1968 and 2016. Perhaps its meaning is only now, amid recession, political mayhem and corruption investigations, becoming clear. That year was when Brazilians, near the end of an unprecedented phase of socioeconomic inclusion, began to demand that government think about the greater good.

It turns out that, as so many investigations and plea-bargained testimony now reveal, that hundreds of government officials have long been thinking about their own good(s).

Rio’s flashy governor, among them, is now in jail; Mayor Eduardo Paes and other local officials stand accused and are likely to follow in his footsteps.

Meanwhile, the state is broke and may, along with Minas Gerais and Rio Grande do Sul, be the first to enter a new federal receivership program, called recuperação judicial. This involves the suspension of Rio’s debt payments to Brasília for 36 months, renewable for another three years. The savings to public coffers here would total R$ 14.1 billion, O Globo reports, citing state Finance Secretariat data. To qualify, Rio must increase state public servants’ pension contributions.

This year’s budget deficit has been calculated at R$17.5 billion. According to Valor newspaper, Rio’s 2018 deficit would total R$ 52 billion if no action were taken.

Oddly, as part of the deal Rio would also reportedly have to hand over Cedae, the state water and sewage company, to the federal government, for privatization.

Although Cedae is said to have modernized its management and finances in the last decade or so, Rio’s sewage is still mostly untreated, water loss is enormous and its pipes are in dire need of an overhaul. The state has been working, together with the national development bank, BNDES, and the newly created Metropolitan Integration Chamber to redesign pieces of Cedae’s sewage business in a public-private partnership format. Most of metropolitan Rio’s favelas aren’t included in formal sewage collection, much less treatment, heavily contributing to the pollution of Guanabara Bay and other water bodies.

Whoever takes over all or part of the company would have to deal with the social aspect of providing service, as Light has tried to do — with partial success.

Rio’s state legislature, Alerj, has spent the last week or so under siege by protesters, protected by police, as they debated and voted a package proposing to restore financial health. Of 22 measures, only six have passed into law — keeping state finances at risk. An Itaú Bank study shows that Rio is likely to experience supplier, employee and pension payment delays for some time to come.

Tuesday, Alerj passed a sales tax increase on cigarettes, beer, gasoline, electricity and telecommunication services. Lawmakers managed to take a vote by show of hands, such that the Rio electorate will never know who was in favor and who was against the bill. Friday, a Rio judge suspended the passage of this bill; the legislature will appeal. Thus Rio mirrors Brasília’s ongoing battles among government branches.

Just how long will police be willing to protect those lawmakers? Apparently with this question in mind, state legislature president Jorge Picciani (also the target of corruption investigations) decided Friday to return to Governor Pezão an extremely unpopular bill to put off raises for public safety workers (police and penitentiary guards) for three years. Another, to raise public servants’ pension contributions by three percentage points, will be put off until February 2017. The state owes police overtime pay for the last four or five months; during the Olympics these workers were obliged to work extra hours.

Rio’s Civil Police force plans a demonstration and a partial strike on Tuesday.

Certainly, with 23 million un- and under-employed nationally (21% of the labor force), slashed budgets and increasingly deficient social services  (plus a gratifying rise in the white-collar prisoner population) — paying cops and prison guards a sufficient wage in a timely fashion should be a priority. Should this not be so in Rio de Janeiro– well, stay tuned.

Wednesday, the state legislature passed a bill ending a tax break for the oil industry, dating to 2007. That was the first year of former governor Sérgio Cabral’s time in office. His administration has now been accused of giving tax breaks in return for kickbacks and favors such as money laundering by way of off-the-books jewelry sales. Officials are now debating the bottom line of tax breaks allegedly meant to attract business to the state. Only now, with empty coffers, has the policy come under scrutiny.

This blogger hasn’t been writing much here lately, as the book-in-progress on how Rio works (in Portuguese) enters its final phase (one hopes). So this post is a chance to stop and just say: if the corruption allegations are proved correct and top Rio officials end up in jail, wouldn’t it be nice to see the metropolis go back in time? Rethink mega-events, avid real estate development, low-income housing and, last but not least, public safety? If only judges could penalize the guilty by having them undo public policies undertaken for personal gain instead of the public good.

One can argue, as former public safety Secretary José Mariano Beltrame recently did in an interview for the book, that pacification put Rio on the right track towards mitigating violence. That, tragically, is so much less than what he set out to do.

And in some cases, that track isn’t looking so good: for the first time, a São Paulo gang now runs at least part of a Rio favela (Rocinha), and is said to be bringing in weapons galore. Crime is up within this particular favela and in surrounding neighborhoods. In the pre-pacification era, when one chefe ran the drug business, he customarily kept a crime-free cordon around the hill. Misha Glenny, author of Nemesis: One Man and the Battle for Rio (about former Rocinha don, Nem) recently called for a new public safety policy, drawing on the public and private sectors, in a Globo op-ed piece.

The year 2016 as the year of Tough Digestion is certainly part of the political equation in Brazil, as elsewhere. Here, our insides roil over the expectations raised in the Lula-Dilma era. These will never go away.

Newly elected Rio mayor, Marcelo Crivella  seems to be struggling already with that equation. Though he promises to curb spending, he’s also talking about taking over and expanding the state subway concession, Metro Rio. While the newly elected São Paulo mayor João Doria has already named his entire staff, Crivella has only come up with two municipal secretaries, two weeks from his inauguration. One is his vice-mayor Fernando MacDowell, age 71, a former Metro Rio executive who’ll double as transportation secretary.

And what will 2017 bring, for Rio and the rest of the country? A key element of the answer will be Brazil’s ability to come up with sure-footed new politicians and policies to replace those who need to go. A new national nonpartisan group, Agora (Now), is working to do just this. In conversation this week with journalists, ITS founder-director Ronaldo Lemos and Instituto Igarapé founder-director Ilona Szabo said that Agora is focusing on what is simple, human and sustainable.

Heartened, journalists said the lack of viable politics in Brazil is largely due to a 21-year democracy blackout, 1964-1985, during the military dictatorship — and that it’s past time for young people to roll up their sleeves. One suggested that Agora map new political ventures across the country, bringing good news into the spotlight.

The political vacuum resulting from LavaJato is a hot topic of conversation in Rio these days.

This blogger hopes that Now really means now; the risk is that, after several years of upheaval, 2018 in Brazil could make conservative calls for law and order look dangerously appealing. Now let’s do our best to get to that year in one planetary piece.

13 Responses to Is there any sense to be made, in Rio?