A two-hour journey from the South Zone, by metro and BRT 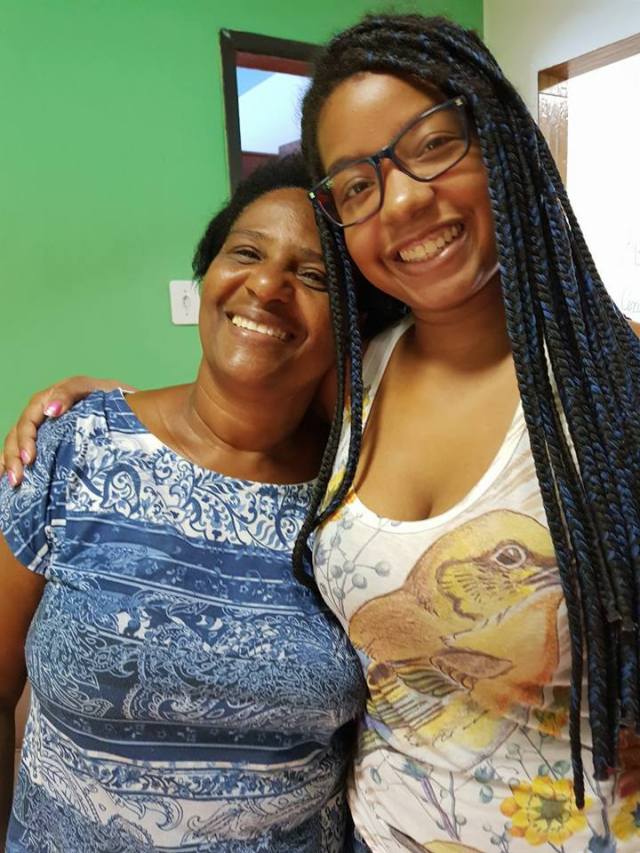 Thais Santos and her aunt Edmar, who loves to travel with the women of her church

The spread-out one-story houses in Rola Um aren’t a favela. Thais Santos, who grew up there, calls Rola Um a comunidade, or community. The Instituto Pereira Passos, which analyzes municipal data, calls it a loteamento, or urban allotment. Homeowners purchased their land on the formal real estate market.

Whatever the label, Rola Um has changed a great deal, according to people who’ve lived there quite a while.

“It was all scrub,” says Eugênia Luisa de Boa Morte, 94 years old, recalling her arrival, so many years ago that when she mentions ten or 20 years her granddaughter Thais corrects her: “I think it’s 40, Grandma. I’m 25 and you already lived here when I was born.”

“Now we have everything,” continues Eugênia, who already has a great-great-grandchild. “Even criminals, lots of ’em.”  Her children, she says, — and she’s the mother of nine living offspring, out of 12, total — “are scared to death of coming here.” 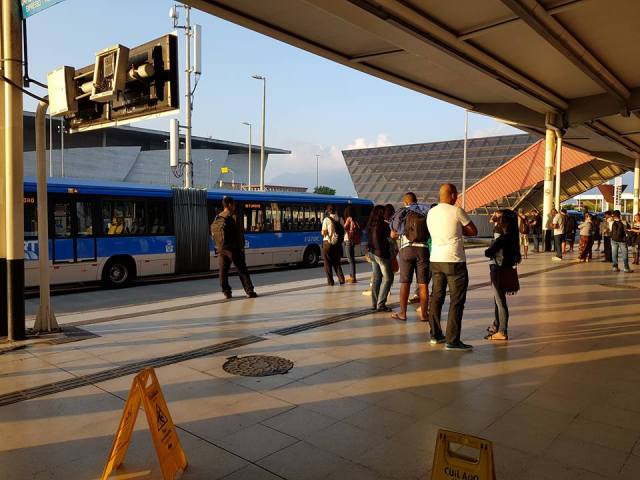 Terminal Alvorada, Barra da Tijuca: crux of the Transoeste and Transcarioca BRTs, stopoff on the way to Santa Cruz

Both of Thais’ grandmothers live on land large enough for a second home, for relatives who ease the difficulties of aging.

Thais, who now lives in Campo Grande, studies phys ed and is part of a theater troupe. On an August Saturday, she took this blogger to see Rola Um. Actually, to see her quite large family.

The interviewees said they coexist peacefully with the aforementioned criminals. In their hearts and minds, however, Thais’ relatives divide the community into good and bad folks; on a daily basis this means keeping children from playing in the street. “Everyone goes inside, we stay at home,” when the cops and robbers start shooting, says Thais’ other grandmother, Ana Ferreira dos Reis, 78 years old, originally from Itaguaí. “I don’t even want to know about it.”

Only two months ago, the community had a day of terror, resulting in the death of an alleged drug trafficker. According to residents, the police appear and bullets fly only when the criminals don’t keep their part of financial deals.

“People leave, there are abandoned homes,” says Thais’ aunt, Edmar Margarida Ferreira dos Reis. According to her and other relatives, the Comando Vermelho moved into Rola Um and Rola Dois long ago, but the violence began to spike in 2014. There’s a little park, center of the Rola Um drug traffic. When members of Edmar’s church went into the community to do missionary work, they lasted ten minutes, deeply upset by what they saw of traffickers and young girls.

A courageous bakery owner, with relatives who’ve returned to Minas Gerais, tells the story of a trafficker who showed up some time ago, ordering coffee. “I don’t serve coffee here,” she answered. “The coffee I have is just for me and my husband.” The unwelcome customer gave up.

On the day of this blogger’s visit, the only sign of criminal activity were CV lettering on some walls and pieces of barricades in the streets. Thais, at first fearful of going into an a trafficking stronghold, took heart. The houses were different from her relatives’. Smaller, without yards, on potholed streets, music emanating from a parked car. A little park, temporarily filled with amusement park rides. A nightclub– the baile funk venue, Thais said. And then we’d come to the avenue, where this blogger got back on the BRT to return to the familiar blocks of the South Zone.

Two hours’ travel, on bumpy, cracked asphalt were enough to note homeless folks sleeping in the lee of BRT stations– and to reflect on how much Rio de Janeiro has changed since this gringa’s first arrival, in 1978 — just about when Thais’ grandmothers were building their homes in Rola Um. 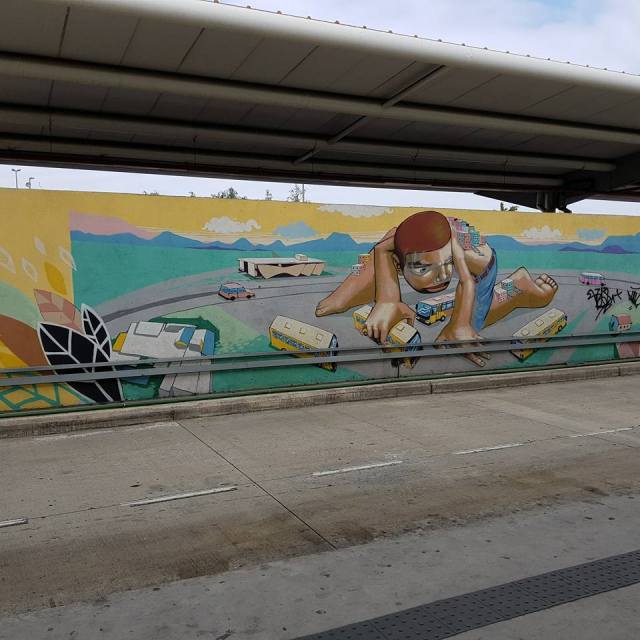 Grafitti at the Alvorada Terminal

Thais with her 94-year-old grandmother, who migrated from Minas Gerais