Best ever, well best in a very long time

[UPDATE, October 2011 – Carnival blocos attracted a record 4.87 million to Rio’s streets, according to Riotur, the municipal tourism agency. This was 83% more than was expected. For Carnival 2012, 476 blocos have applied for a parade permit.]

The probable discovery of the 18th century Valongo dock ruins on the eve of this year’s carnival may have brought to light, as O Globo commentator and historian Elio Gaspari pointed out in his Ash Wednesday column, the largest slave port in the world.  What timing.

The ruins emerged just at the end of February, as the port area undergoes the Porto Maravilha urban revitalization work ensuing from the pratically astrological miracle of alignment among city, state and federal governments that began in 2009. From that alignment ensued a series of public policies that have begun to integrate the city’s largely hilltop favelas, or morros, with its more formal geography, the asfalto, as cariocas call it. Gaspari notes that although at least 600,000 slaves passed over the cobbles of the Cais do Valongo between 1758 and 1851, the area was buried and forgotten, “due to the astute amnesia that expels blacks from Brazil’s history”.

Nothing could be more apt than the reappearance of the Valongo dock, just as Rio de Janeiro celebrated Carnival with more verve and plenitude than most cariocas can remember as ever having been the case. Even grouchy Arnoldo Jabor, filmmaker and columnist, was wowed. “Little by little,” he wrote in his Tuesday O Globo column, “the country rebuilt its self-esteem, and, especially in Rio, it has increased lately, with improved control of crime and the end of the sordid governments that threw the city into a hole… one feels the rebirth of a gregarian desire, even for physical contact among people, an explosion of freedom and encounter that leads to the conclusion that there was a democratization of  life in common, an irresistible desire to exist in community.”

Street carnival —blocos, large groups of costumed, dancing revelers– has been making a comeback over the last five years or so. But this year one bloco drew two million people to downtown streets on Saturday morning, and another climbed the hill to the Cantagalo favela, now pacified, for the first time in 27 years. Three couples got married during bloco festivities.

O Globo reported that the military police cut its presence statewide by 1,000 officers because the favelas surrounding the Sambadrome, where the Carnival parade took place Sunday and Monday nights, have all been equipped with police pacification units. The police also made use of the new preventive Centro de Comando Virtual (Virtual Command Center), which links police forces at all levels of government and is based on FBI technology; increased police vehicular presence; and kept an eye on the partying with 30 new cameras.

There are so many blocos— about 400– that some will gather only next weekend. This year city hall regulated the blocos and their schedules, provided more policing, set up more porta-potties than ever before, and police actually arrested almost 700 people (more than double last year), including women, for public urination. Over 700 cars were towed, more than twice last year’s number. Unfortunately, trash collection also rose, to 849 tons, up 12% from 2010. A beer company hung hundreds of light-hearted signs urging off-street relief. Even so, the stench was pervasive, bars and restaurants found themselves locking their doors, and some cariocas suggested it might soon be time to concentrate the blocos in one spot, possibly the Aterro, to keep the city clean and uncongested.

Because of reduced crime and increased awareness of Rio due to the upcoming sporting events, this year’s carnival is said to have attracted a million visitors, many of them Brazilians from other regions. Fourteen cruise ships docked in Rio for the fun, and a total of about US$ 600 million is expected to flow into the city’s economy. 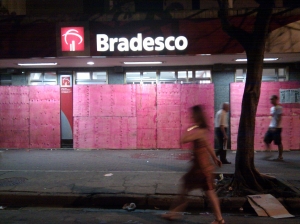 Many banks protected their windows

The formal Carnival parades at the Sambódromo highlighted the marvelous city in many ways, including a whole section of dancers dressed as the Disney Zé Carioca character (photo #9). Perhaps the most striking was Salgueiro samba school’s drummers, dressed en masse as BOPE soldiers, à la the two Elite Squad movies; some observers thought the BOPE glorification overdone, given that those troops are still a largely violent and corrupt bunch– especially in contrast to the fresh-faced police pacification units. Salgueiro is one of the most recently pacified favelas; the drummers have been instructed to return the costumes to the school forthwith, so as not to create confusion. 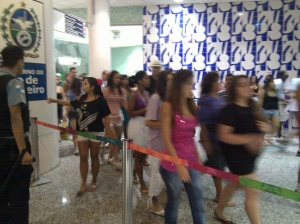 Metro station under the new federally-financed elevator to Cantagalo favela

Rio Governor Sérgio Cabral rather humbly said Tuesday this was the best Carnival since he took office in 2007, and that much remains to be improved. The festival must be in his blood, since his father– who paraded this year with the Mangueira samba school– is a historian of popular Brazilian music. Cabral’s government moves ever forward, even during Carnival, with the creation of two new agencies, one to reduce the state’s carbon emissions, and one to promote tourism related to events and sports.

Meanwhile, city sanitation workers continued a massive cleanup, with the collection so far of over 400 tons of trash just from the Sambadrome, alone. Rio’s got to be fresh and sparkling for U.S. President Barack Obama’s visit, March 20.

Here are the city’s plans for the Valongo dock for those interested in visiting it– the federal government must still give its approval.

3 Responses to Best ever, well best in a very long time