A blessing of the highest order 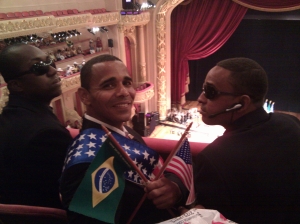 There were headsets for the Portuguese translation of U.S. President Barack Obama’s speech yesterday to an audience of over 2,000 at  Rio’s art deco version of the Paris Opera, but Rinaldo Gaudêncio Américo and his two bodyguards (“Jack” and “Bauer”) passed. Rinaldo was dressed up as Obama, and Obama wouldn’t need a headset.

“There’s a thing I see in Obama, it’s a simpatia, a carinho,” Rinaldo, also a son of a mixed-race marriage, told RioRealblog. “I always say hello to people I see in the street, it makes a difference. And you see, today he’s wearing the same tie I am, a silky smooth red one!”

The real Obama, hopping up with enthusiasm onto a raised platform from the stage, was indeed simpático. Using the same trick Brazilian politicians depend on to conjure rapport, he began with a reference to soccer. “…I want to give a special thanks to all of you for being here, because I’ve been told that there’s a Vasco football game…”

Apparently the absent vascainos had their priorities.

Obama may not have believed that Flamengo (which played after his speech) is Rio’s most popular soccer team, when its president Patrícia Amorim told him this earlier in the day, as she gave him a black and red team shirt with his name on it. But he did know exactly how to win corações.

“Now, you may be aware that this city was not my first choice for the Summer Olympics,” he said, referring to his hometown’s failed bid.  “But if the games could not be held in Chicago, then there’s no place I’d rather see them than right here in Rio.  And I intend to come back in 2016 to watch what happens.”

O Globo‘s cartoonist Chico Caruso got the message; his front-page cartoon titled “Brazil-Obama Talk Show: Last Part “ sported a waving Obama just about to board Air Force One, saying “…and we’ll be right back!”. Nothing like knowing a U.S. president, current or former, is checking up on you. This will certainly add to the momentum for change here.

Meanwhile, Rinaldo– who drives radio station reporters around the city when he’s not impersonating–  knelt in front of his seat and waved two flags, ardently hoping for a doppelganger moment. As far as he was concerned, all Obama had to do in Rio was show up, so he could, too. 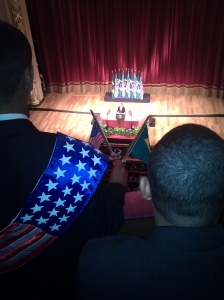 For cariocas, the presidential stay– which included a visit to the “pacified ” City of God favela– was one more piece of evidence of something they’ve known for ages: Rio de Janeiro is a diamond in the rough, currently undergoing lapidation.

“For the first time, hope is returning to places where fear had long prevailed,” said Obama.  “I saw this today when I visited Cidade de Deus -– the City of God. It isn’t just the new security efforts and social programs  — and I want to congratulate the mayor and the governor for the excellent work that they’re doing.” Both were present in a box seat, and won a genuine round of applause.

“But it’s also a change in attitudes,” Obama continued.  “As one young resident said, ‘People have to look at favelas not with pity, but as a source of presidents and lawyers and doctors, artists, people with solutions.’” 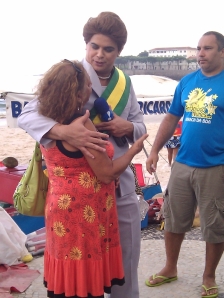 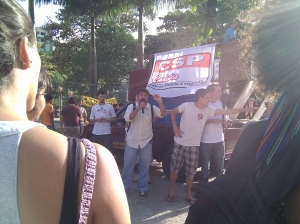 A few protesters, the day before in Ipanema

In his speech, Obama didn’t mention the fact that American companies are eager to win Olympics- and urban revitalization-related business.  But for cariocas, his choice of Rio (and exclusion of São Paulo) was an immediate and welcome measure of how far the city has come and the potential it bears. The Obamas couldn’t have done better to highlight tourism here, with visits to the Corcovado Christ statue, introductions to a variety of Brazilian music, a bit of soccer, and a capoeira presentation. 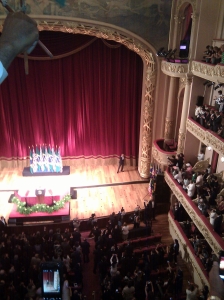 Poor Rinaldo didn’t get a wink, a grin or a wave, despite his choice of seats dead center in the rafters of the recently restored theater. “It’s hard to see beyond the lights when you’re on the stage,” he philosophized.

The real Obama provided his own share of philosophy, ending his speech with a quote from, of all people, the popular Brazilian self-help writer, Paulo Coelho: “With the strength of our love and our will, we can change our destiny, as well as the destiny of many others.”

For local coverage in Portuguese, click here. For a two-part video of the Rio speech, click here.

7 Responses to Oba! Obama in Rio