Current events seem chaotic, but are not

And now for a bit of historic backdrop

Julio Ludemir, left, and Écio Salles, right, at the 2015 FLUPP with a young writer in the Chapéu Mangueira favela, up the hill from Leme

Imagine a time when Rio de Janeiro favelas occupied white spaces on city maps and there was actual debate about whether or not favela children should be in full-day school programs, as anthropologist Darcy Ribeiro intended for his CIEP pre-fabricated schools, created in the 1980s and 1990s.

Nothing like chewing the fat — grilled sandwiches, water and juice, actually — at day’s end with a couple of old Rio favela hands.

RioRealblog did just this yesterday (as part of book research) at a café in Leme with Julio Ludemir and Écio Salles. After decades of experience among young people from favelas and poor suburbs, Ludemir and Salles in 2012 created the FLUPP, a vibrant literary festival and series of workshops connecting and supporting writers from these relatively poor neighborhoods. 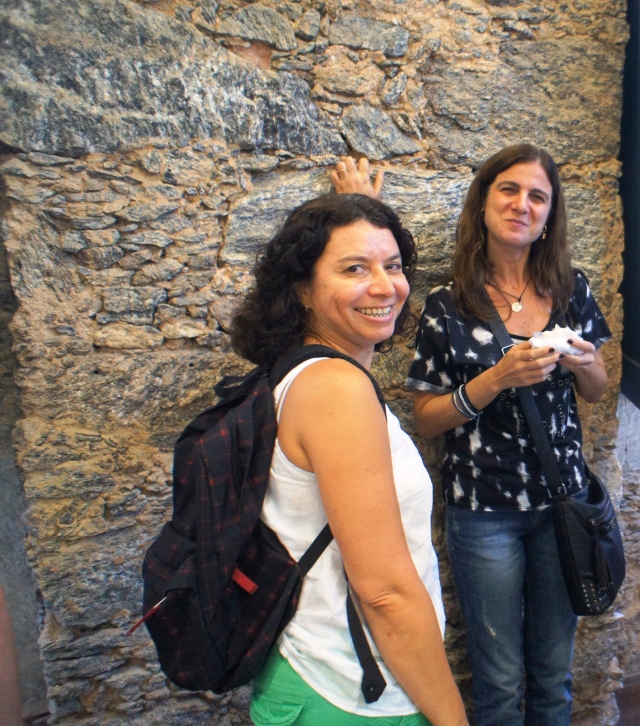 Nothing like taking the long view. It’s customary to think of Lula’s 2002 election as a turning point for Brazil. True, the Workers’ Party’s time in government put poverty center stage, something never done before. But social inclusion has been happening, say Ludemir and Salles, all along — at least since World War II, when poor rural folk left home for the big city.

The late 1980s and 1990s, they point out, is thought of as an era of urban collapse in Rio, and it truly was the worst of times, with group killings, drug wars, kidnappings, and mass beach robberies known as arrastões. Banks and other businesses hightailed it out of the Marvelous City; even the stock market moved to São Paulo. 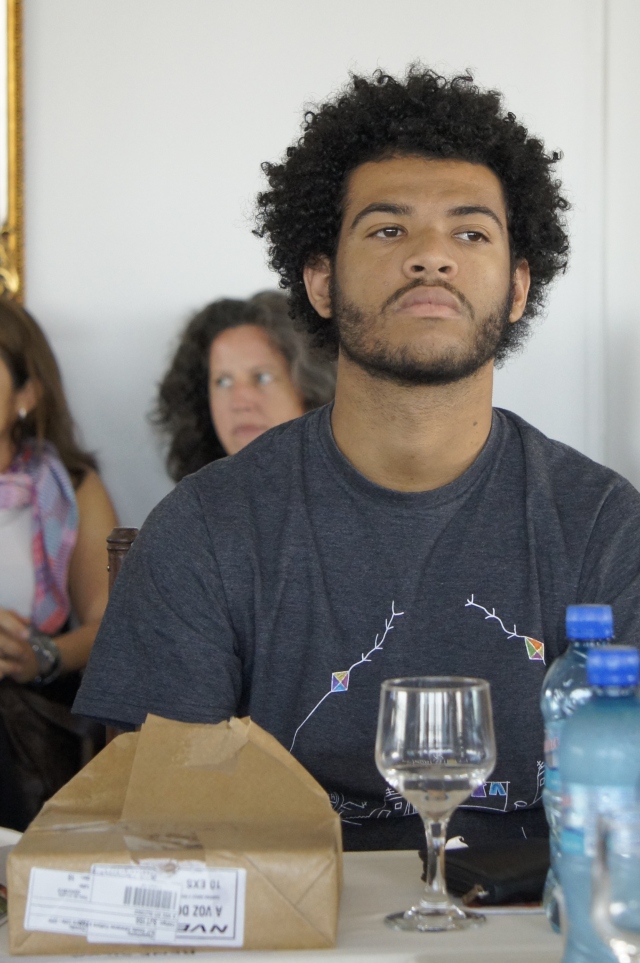 René Silva, Complexo do Alemão resident who at age 17 pioneered news from the favela front during the 2010 Army invasion,with his Voz da Comunidade newspaper Twitter account

Many cariocas left Rio or walled themselves off to the danger. But a select few were moved to action, creating action and cultural groups such as Viva Rio, CUFA, Afroreggae, Nós do Morro, and what came to be the Observatório de Favelas.

These groups were preceded, Ludemir notes, by others such as FASE and IBASE, and the work of the Catholic Church and organizations springing from Liberation Theology. 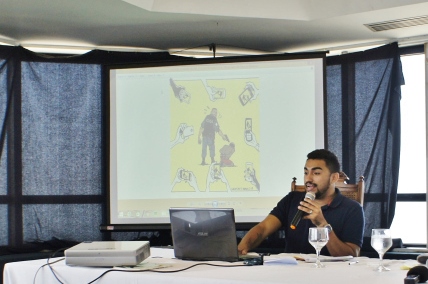 There’s always been a power struggle in Rio between established interest groups and favela residents, say the FLUPP creators, with forward and backward maneuvers. But, they believe, the voz da rua (voice of the streets) has steadily become louder and more apt to find ears.

“You used to have organizations from outside, dependent on local representatives to help them carry out work in favelas,” recalls Ludemir. “Later, you had as many as twenty local leaders, taking initiatives.” Now, adds Salles, there are so many local activists that it would be a dangerous task to name the top 100. “They may well run us over,” says Ludemir, for whom this would be a welcome development. 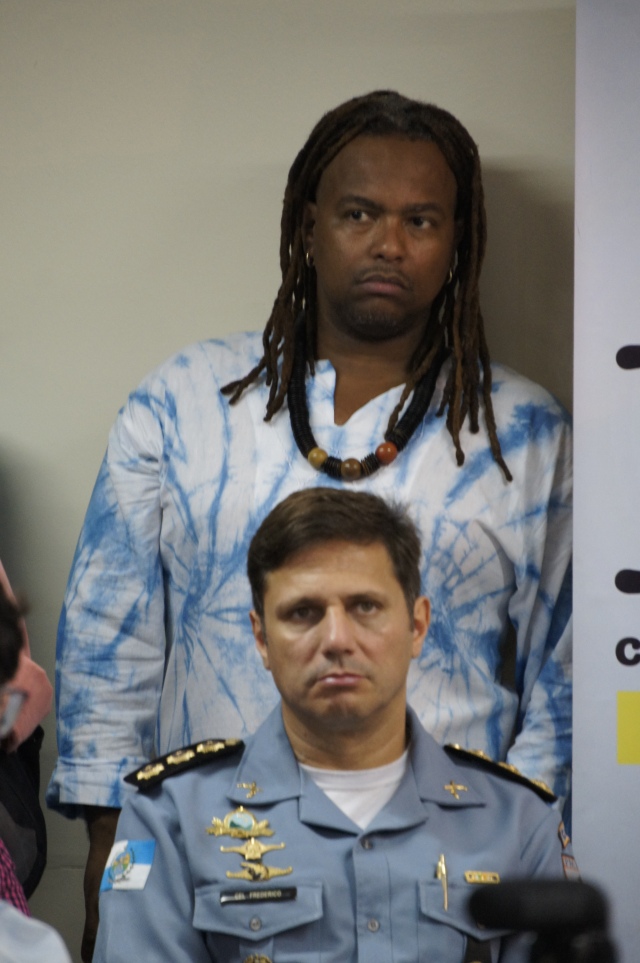 Binho Cultura, West Zone community activist running for City Council this year, looks over the shoulder of a police official during a dialogue session on violence in 2015

Key to the boom in activism is the media revolution, of course, with young people now able to access information, create dialogue and influence events like never before. Improvement in the quality of high school education has also played an important role, adds Ludemir, noting that the current economic crisis forces cash-strapped middle class students to share classrooms, curricula and teachers with favela residents.

In addition, Lula and Dilma’s governments widened access to university education. University racial quotas (which existed before Lula but expanded during his terms) led Afro-Brazilians to declare their own race for a positive reason — for the first time, says Ludemir.

Amid all the daunting political and economic upheaval, Brazilian society is becoming more democratic, according to Ludemir and Salles. They point to last year’s law that at last extended full labor rights to domestic workers.”For many families, it’s become too expensive to have a maid,” says Ludemir. “Parents will have to teach their children to do chores.”

Here it’s worth remembering that the 2013 street demonstrations across the country focused on the poor quality of public services. Under Brazil’s traditional two-tier system, the middle and upper classes pay for their own private services, leaving the poor to fend for themselves when it comes to education health, transportation and public safety. Such a division is ever less acceptable, particularly since the 40 million who left poverty during the Lula years got a taste of a different sort of quality of life.

Salles names four young people he knows, one in São Paulo, who are interested in seeking political roles — great news given the low quality of our elected representatives, overall. “There is a kind of accumulation [of social change] happening,” he says, adding that young people now face the challenge of making space in an increasingly antiseptic city, where diversity and popular culture need more support.

As yesterday’s odd events in Congress show us, the ongoing shifts in national values and power — political, social, economic– present themselves as chaos, are painful to experience and may shock both locals and foreigners. Yet it’s wise to recall, amid the turmoil, that this is a country built not on democratic ideals, but slavery and all its ramifications. Rio is one metropolis where people are working hard to change this.

“Passinho” pros, on their return from the 2012 London Paralympics, where they performed a dance born of cybercafés and cell phones

12 Responses to Current events seem chaotic, but are not