Worse than you can imagine 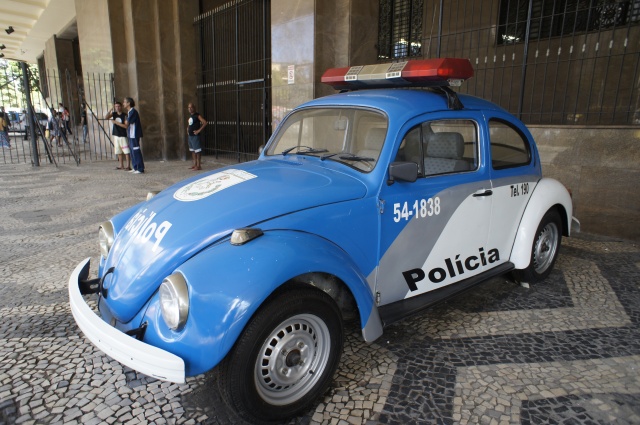 Relic outside the Public Safety Secretariat: sign of the times?

Unlike housing, health and education, public safety is a service that doesn’t lend itself to different approaches, one for the rich, one for the poor.

This is because building walls, paying paramilitaries, buying weapons, hiring bodyguards, blacking out car windows and living in bubbles ultimately bump up against the fact that we live in one city. Regardless of our awareness, social and political phenomena affect us all. Yesterday’s metro Rio paralysis is the best latest evidence of this.

But Rio has long acted as if it were possible to treat public safety with the same duality we use when it comes to the other services we need.

Yesterday there was shooting all over Rio  — especially in Rocinha— spurring tons of questions. What’s going on? What went wrong? Can this be fixed?

The topic came to light in interviews carried out for the just-completed book (in Portuguese) on how Rio really works*. According to Professor Ignacio Cano, consultant and police reform researcher, coordinator of the Laboratório de Análise da Violência (Violence Analysis Lab), a key factor in the pacification failure was the 2013 decision to bring the UPPs — up to then, independent– into the overall Military Police administration (now, Cano says, the decision to bring the UPPs into the battalion system, dealt a mortal blow to a program meant to spread community policing).

The blog will soon present more information, with additional points of view. The working hypothesis is that our police forces are patchworks of discordant, badly sewn pieces. Specialists and former police functionaries say that many of these pieces are fiefdoms belonging to different officers, fertile areas for corruption. They claim that our police forces lack control, that the Public Safety Secretary’s power is limited to his capacity to appoint the Civil and Military Police commanders.

There’s plenty of compost. If federal Attorney General Raquel Dodge approves Justice Minister Raul Jungmann’s request (made yesterday) to create a task force to investigate organized crime in Rio, we may have a new wave of shocking revelations in the Marvelous City.

No security for Public Safety

According to Sílvia Ramos, also a police consultant and coordinator of the Centro de Estudos de Segurança e Cidadania (Center for Security and Citizenship Study ), CESeC, Military Police weapons storage areas lack security cameras. Munitions are given out with little control; constant requests raise no flags. Vehicle entry in battalions is noted on papers that can’t be consulted later, in case someone wants to know who visited when. Even police reports, made on the spot, lack adequate controls.

Police lack adequate psychological treatment and there is practically no personnel department. It was widely known that UPP cops, even in their most golden days, worked in sweaty containers and had spotty access to bathrooms.

Not to speak of late wages, police shooting deaths or the infantile and repetitive disagreements between state and federal officials, plus mayor Marcelo Crivella’s long silence.

Maybe exercise will do some good

To top all this off, the Public Safety Secretariat’s elevators are stopped. By law, they can’t function without a maintenance contract. No service provider was interested in signing a contract given the a risky payment situation. (Worse, as we’ll see in a future post, the state’s Fiscal Recovery Plan is quite fragile)

This is the environment in which the objective is to arrest criminals and reduce violence levels, using intelligence, working together with the armed forces.

Is there a way out? An attractive though improbable scenario would see Congress accept the federal Attorney General’s office’s second indictment of president Michel Temer, with Rio federal deputy Rodrigo Maia’s temporary rise to the presidency. Once there, he might just decide to stand out in the role of Rio savior. Maia has shown interest in the matter, you might say, calling for the current Public Safety secretary’s dismissal.

Otherwise, the solution will come together over the long term, with political renewal and slow recognition that public safety must be a single umbrella to protect everyone.

*This blogger finished writing the book that kept her busy for the last three years (Rio Real: quem manda e como manda numa cidade em transformação, os anos Cabral-Paes) and is back to the blog at full steam. Posts on the way: police, management/corruption; favela and suburban youth activists today, no more government support; the viability of the Fiscal Recovery Plan; City Council, a new role in the metropolitan area? — and much more.