Police cars — among much else– fundamental to public safety 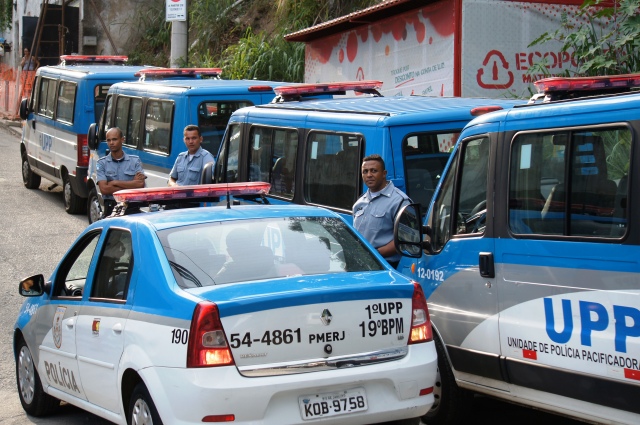 In the bonanza years 2009-2014, shiny Military Police cars. The favela of Morro do Chapéu Mangueira, where the peace is also tarnished

We’ve seen many reports in recent months about the horrendous state of Rio police cars, a topic dating back at least to the 2007 Elite Squad movie. Despite the attention, it looks like ragtag cop cars will stay in the public eye for some time to come. Today, O Globo newspaper published a depressing story on Rio state’s finances.

While police improvisations sadly bring to mind cartoon torments, new vehicles — part of a pre-intervention state purchase — are coming on line. And yet there seems to be more improvisation: last month, in a ceremony at the Flamengo Park monument to World War II dead, generals, the governor and the Rio de Janeiro Military Police, showcasing drums and marching, received a grand total of 265 Ford Ka cars – with another 290 yet to deliver. The West Zone and the Baixada Fluminense suburbs are to get most of the cars.

“Are the tanks full?” asked a joker on Twitter, making reference to last year’s fueling difficulties (funds were lacking).

The Military Police fleet comes to 5,366 cars but for various reasons about 40% of these are sidelined. Hundreds of cars are now being repaired.

Worse, the Ford Ka received a zero safety rating last October in an independent evaluation by Latin NCAP. If a police officer chasing would-be criminals has an accident, he or she risks chest injury and a suddenly-open door, in a vehicle banned in Europe. The Rio de Janeiro Military Police say that another evaluation of this model, by CESVIBRASIL, “well known by vehicle insurers,” produced a reasonable rating, “even higher than the VW Voyage, widely used by security forces nationwide.”

Crappy cop cars can be found anywhere. This must-read article (relevant to Rio’s public safety issues, by the way) about a former CIA agent-turned police officer in Savannah, Georgia, opens with jabs about the cars there.

Military Police safety and health – general work conditions — have been a concern of the state Public Prosecutor’s office for years. In fact, the adequate supply of police cars (with cameras), is part of a Termo de Ajustamento de Conduta (Conduct Adjustment Commitment, or TAC, the Portuguese acronym), signed in July 2015 between Governor Luiz Fernando “Pezão” de Souza, the Military Police and the state prosecutor’s office:

“The State must keep Military Police Units equipped with police vehicles in good repair and in sufficient quantity for services to be performed”, says item 9.3 of the TAC.

The state’s financial crisis is what led to a shortage of cars in good repair, among other key items. The TAC’s wording allows the state to put off fulfilling a commitment to spend R$ 4 billion over three years (above and beyond the normal public safety budget), on the regulation of the workday, health and safety, training, transportation, food, structural aspects of police units, and measures to protect society from police abuse of power.

Few of those working in the public safety area in Rio are aware of the TAC, which has received scant press coverage; those who do know about  it give it little importance. For public prosecutors, it’s one of many such documents drafted to change behavior in a variety of government institutions. Prosecutor Gláucia Santana initiated this one over five years ago, after pacification police complained of work conditions. She and her successor Cláudia Türner recognize its fragility, given scarce resources. But they say the TAC’s true worth is as a complete reading of what the Rio police need to do, internally, to help make the state safe.

Their boss, state General Prosecutor José Eduardo Gussem, said at a Brazilian military event last month that his office is working to open Rio institutions to public scrutiny, using technology and innovation. The TAC created such access to a new database of police operations in favelas, which could be used to inhibit rogue police activity (not a rare phenomenon, by appearances).

Federal intervention in the state’s public safety forces, activity and management came in February as the Rio prosecutors were working on cost-free TAC items, such as alphanumerical police identification on uniforms – the lack of which is a potential problem during street demonstrations and in favela police operations.

This week a federal intervention representative will attend a meeting of the Military Police TAC periodic oversight committee, which includes representatives from each of the signatory institutions and the state Finance Secretariat. At last, in preparation for the meeting, the intervention office has asked for a copy of the TAC itself, which is only 11 pages long.

Although the generals have carried out battalion inspections, they may find the TAC somewhat shocking: one of the commitments the state agreed to in 2015 is to provide police officers with food and water. Intervention officials agree that police work conditions must improve, as well as many other aspects of Rio’s public safety quandary. Brasília has earmarked R$ 1.2 billion for the intervention, with allocations stretching into 2019 despite upcoming changes in the presidency and Rio governorship.

In addition to the issue of food and water, time spent making police station crime depositions does not count as hours worked, overtime isn’t guaranteed, and each officer buys his or her own uniform and receives a mere one hundred reais for transportation (often paid by employers, in Brazil). Until recently, anti-ballistic vests went from chest to chest, unwashed — and some cops didn’t even get to wear one.

Gláucia Santana, the prosecutor who initiated the TAC, told this blogger that unprotected police shooting deaths kept her awake at night while she was drafting the document.

Meanwhile, prosecutor Cláudia Türner, who’s been in charge of the TAC for almost three months, says she believes that Rio will need between five and ten years to check off all the items in the document. A realistic expectation is for rounds of dialogue with the Military Police, she says, at times with judiciary participation (for non-compliance, ultimately subject to fines).

“What’s the alternative?” she asks. “A witch hunt? Suing for administrative misconduct?”  It will be necessary, she expects, to visit police training classrooms to verify the teaching of concepts regarding police checks, human rights and a change in police culture, from war to crime prevention. There’ll be many visits and inspections, as well as research, for Türner and her team of two others. She also means to focus on health and safety, financial administration and police power abuse. 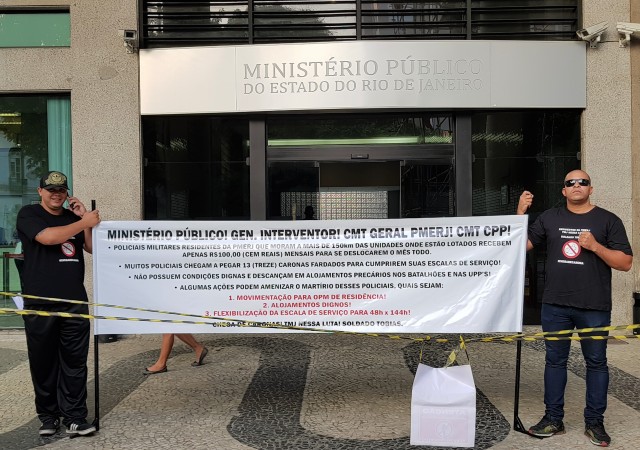 Police complaints, at the entrance to the Rio Public Prosecutor’s Office

This is the same Picciani who, little more than two years later, was picked up at Santos Dumont airport early one morning to make a deposition (followed by arrests) on corruption allegations, in a shiny black Renault Fluence preto — part of the fancy Federal Police fleet.