Funk Carioca comes all the way down the hill 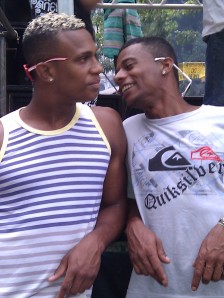 Some people actually do manage to stay still

In fact, the transformation of Rio is an agglomeration of forces, pushing and pulling in the direction of the North Zone, towards the military police, to the paramilitary gangs, to the Olympic Committee, to the suburbs, the druglords large and small, the South Zone, downtown, politicians, favela residents, bus fleet owners, the civil police, to the real estate moguls, NGOs, elites, arms traffickers, government officials, oil businesses, construction companies, the new middle class, the traditional middle class, the port, the West Zone… and we’re all of us in the midst, where  it often feels as though we’ll end up in the East Zone– the frothy Atlantic, levando caixote (getting pulled under by a wave).

One day, a state legislator and his family are forced into a brief exile by militia squad death threats. Another, elite military police meet with favela residents and actually listen to their complaints, promising to work to end police abuse. One day, a downtown restaurant’s undetected illegal gas hookup kills four people— on the same square where city officials had just removed unsightly fencing in a bid to beautify the city and improve access. 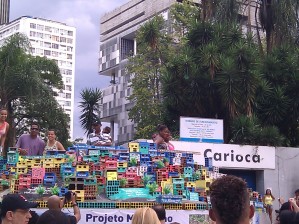 In the background, Petrobras headquarters

A top police commander is jailed for allegedly ordering a judge’s assassination. A bigtime militia member escapes from jail.

One day the Rio state government is suppporting sophisticated cultural events in the Complexo do Alemão, another, the  army is conducting house-to-house searches and using a sound system to tell residents to stay indoors. Yet another day, a judge rules they can’t do this.

But Sunday, one coordinate was made deafeningly clear: Rio’s funk music is a cultural phenomenon to be taken seriously. 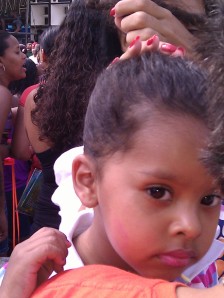 Downtown from ten a.m. to eight p.m., on nine competing mini-stages strung along Rua da Carioca and culminating at the Largo da Carioca, separated by walls of speakers, DJs and MCs shook the very entrails  of a crowd estimated by organizers at up to 150,000. 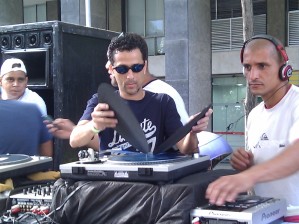 Funk does a lot of sampling

“It’s all about the beat,” said one partygoer, frosty beer can in hand.

Funk carioca, as this music is known, made it out of favelas into the New Yorker magazine back in 2005 and onto the stage of the Circo Voador in 2008, and also earlier this year. But from the birth of this unmistakeable beat in the 1980s to Sunday’s gyration of hips and butts in the streets of downtown Rio, decades have passed.

Samba– banned in the early 20th century, took a similar route down Rio’s hills to open public spaces such as Praça Onze. Some historians say Getúlio Vargas organized its performance to co-opt the poor. Notably, Vargas razed Praça Onze in the 1940s, to build the avenue named after himself. Samba lived to become Brazil’s national music. 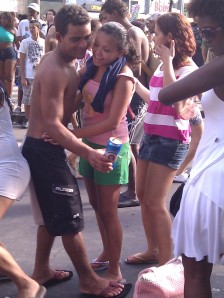 Although it has a warm place in the hearts of international DJs and is on the sound track of Elite Squad 2,  funk carioca isn’t fully accepted here. Because favela drug traffickers traditionally hold giant bailes funk, or funk dances, to show off their power and keep their constituencies entertained, the pacification police have tended to ban them or shut them down much earlier than the usual six or seven a.m. cutoff. Some funk music, proibidão (prohibited),  exalts drugs, drug traffickers, and weapons. And a lot of the lyrics, plus the dancing, could easily best the Kama Sutra.

For many, funk carioca raises concerns about gender stereotypes and morality. The music conveys the idea that men should be polygamous and women should cater to their tastes.

Nevertheless, the Rio de Janeiro State Culture Secretariat allowed tax breaks for the event and spent an outright US$ 41,000 equivalent, on the main stage. The state recently announced it would fund the production and documentation of funk music, as part of a new policy valuing popular culture.

The venue, Largo da Carioca, is no more and no less than the heart of Rio de Janeiro, harking back to the 17th century. It’s a metro stop and a weekday pedestrian crossroads for those who work in downtown offices.

“The importance of this event is that it simply states that funk is the most legitimate and productive front of carioca culture in the 21st century,” says Fred Coelho, blogger, DJ and literature professor.

In the background, the convent of Saint Antonio

And of course, every action brings a reaction.

“The Parada Funk brings to the surface prejudices and conservative ideas that were latent in public opinion, about the esthetic production of young, black and poor city residents,” says Coelho.

And so it is that one day, Rio’s most influential newspaper, O Globo, gave prime space to the Parada Funk, on the front of its arts section, the Segundo Caderno, noting that the organizer is a grandson of the famous poet Ferreira Gullar. And on the next, the paper’s slim coverage was headlined “In the Largo da Carioca, signs of disorder in the beat of the Parada Funk: party had irregular parking and people urinating in the streets”.

Here is a recent gripping first-person description by Claudia Zmbrana of a baile funk in English, with lots of background about this music.