Prologue to Farce or Tragedy?

Rio has changed hugely in just the last four years. Thanks to economic growth, investment and pacification, the city is more integrated and vibrant than perhaps it has ever been. Cariocas of all classes are freer than they were before to move around and try out a gamut of cultural experiences, to invest in their dreams, and forge new partnerships. 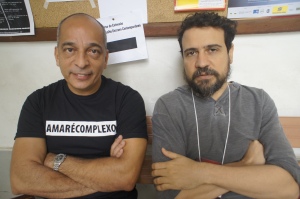 In 2010, Sérgio Cabral was reelected governor and this year, mayor Eduardo Paes received his own overwhelming show of approval. Clearly most citizens of both Rio state and capital city support the continuity, consolidation and deepening of their urban policies.

As the overall context has improved (with exceptions and backtracking) hardworking, visionary and creative cariocas have done much to contribute to the tricky process of urban integration.

Pedra de Sal on a Friday night, for samba where slaves once carried bags of salt

Last month, RioRealblog reported on a new move to manage the city’s social needs, which may augur well for the most problematic aspect of Rio’s transformation.

With so much activity and forward movement, one could easily conclude that all is swell in the world’s most exciting seaside city. But restless souls must prevail, especially today, the one-year anniversary of RioRealblog instigator André Urani’s passing.

Herewith a to-do list for us all (and please do comment, publicly or privately, if you have information, leads, additional questions or items, contacts, etc.):

Morar Carioca: what are the program’s exact plans, budget and timeline? What has been accomplished so far, and what remains to be done? Will the goal of bringing all of Rio’s favelas up to standard (urbanizar, in Portuguese) by 2020 be met? How is urbanizar defined? What sort of  community participation is occurring? Who’s in charge and who’s checking up on them? What does the Inter-American Development Bank, which partially funds the program, have to say about it? Is there any coordination with the federal PAC program, responsible for upgrading Rocinha, Manguinhos, and Complexo do Alemão? And what exactly is the PAC up to? Is there any sharing of methodology or information between these two levels of government? Does the Olympic Committee have any role in the Morar Carioca program?

Sanitation, both in favelas and in formal areas of the city: who is responsible for what? CEDAE, Rio Águas, PAC? What is the cost and what is the timeline for collecting and treating all of Rio’s sewage? What favelas already have sewage collection/treatment and what needs to be done to bring all of them into the system? Is it true that 70% of Rio de Janeiro doesn’t have adequately treated sewage? What can we do to improve trash collection in favelas, still a widespread problem? Is there a task force working on sanitation? If not, why not?

Gentrification: How can a dialogue among residents, government agencies and other interested participants be established to determine what aspects of life in Zona Sul favelas can and should be preserved? How can this be done and who should do it? Or are we just going to let gentrification happen?

Removals: Who determines the removal policies and procedures of the Municipal Housing Secretariat? Is there adequate oversight and governance, to ensure that residents’ rights are respected? Are they really being removed to areas close to where they used to live, as the city says?

Financial sustainability of pacification: How much does pacification cost and who pays? What’s the budget for upcoming years? Can the outlays be sustained for as long as needed? Who will determine this, and how?

Port area and mixed-income housing: What happened to the mixed-income housing proposal drafted by Columbia University students at the request of the Municipal Housing Secretariat? How can we evaluate current plans for the port with regard to the kind of healthy urban mixing of resident income and land use that Jane Jacobs taught urban planners back in the 1960s? Or is it too late to include this?

Slavery memorial: the Cais do Valongo, over which an estimated 900,000 slaves passed between 1758 and 1843, has been excavated and preserved, and is now open for visits. Will Rio erect a memorial to these people, their origins and their descendants? Writer Alex Castro compares slavery to the Holocaust here.

Access to power and water: large swathes of the city’s population don’t have a dependable supply of power and water. Some pacified favela residents say the lights go out more, now that Light’s in charge, than in the days of informal hookups, or gatos.  What’s going on? What’s being done to improve the situation?

Young favela residents with big ideas about the future

Public neglect of many of these questions could truncate Rio’s transformation. Civil society must play a larger role than it now does. Brazilian media need to move away from traditional biases and towards making a contribution to the process of urban change — with unblinkered emphasis on the common good.

A popular Government, without popular information, or the means of acquiring it, is but a Prologue to a Farce or a Tragedy; or, perhaps both. Knowledge will forever govern ignorance: And a people who mean to be their own Governors, must arm themselves with the power which knowledge gives.