While you were watching the World Cup part II: public hearing on PAC II for Rocinha, held Ash Monday

Hurriedly announced, given a miss by mainstream press 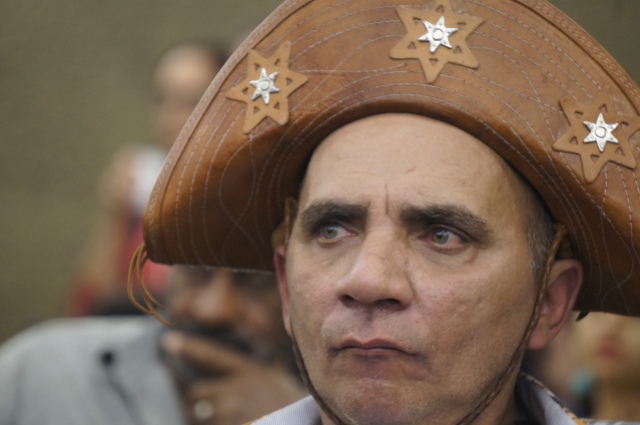 Adelson Guedes, representing a favela many of whose residents hail from the Northeast of Brazil, was at the hearing in partial regalia

The proposals are part of a US$ 719 million equivalent Rio state project for Rocinha favela, the PAC II, about to be submitted to the federal funding agency, Caixa Econômica Federal.

Another resident reminded those present that it’s election season, that the PAC I promised sanitation upgrades which didn’t occur, while showier works such as a pedestrian overpass, a sports complex and a library were completed.

Dennis Neves, who says it was his idea to march last year from Rocinha to then-governor Sérgio Cabral’s Leblon apartment building

“It’s hard to believe the things that they present to us,” he complained.

Monday, a four-hour required public hearing, held downtown in the dilapidated auditorium of a state office building, revealed the difficulties Brazil faces in deepening its democracy.

Announced during the World Cup in the Diário Oficial, with less than a week’s notice, the hearing almost filled the small auditorium. Present were various leaders from Rocinha and São Conrado, the formal neighborhood that has a symbiotic relationship with the  favela — home to 100,000 according to the federal IBGE, or double this number, according to residents who say the last census missed many households. 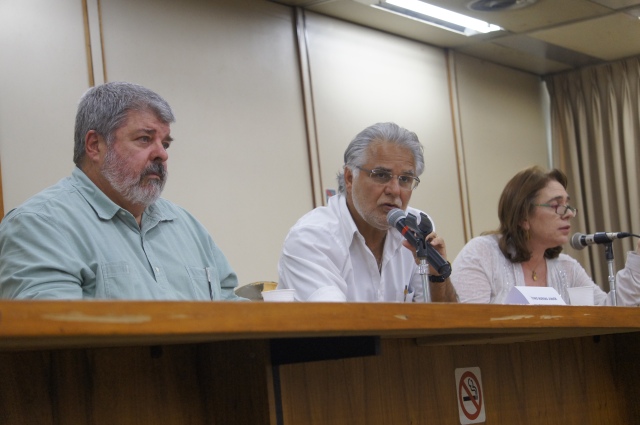 Nowhere to be seen (or at least, heard) were city government officials, who will have to take on responsibility for maintaining part of the public works once they’re finished. Despite the presence of several photographers, yesterday the only story published on the hearing was a report by a Rocinha resident.

Four days prior to the meeting, O Globo predicted the hearing would “catch on fire”. That fire, however, had been previously put out, since the Empresa de Obras Públicas do Estado (State Public Works Company), EMOP, decided only days ago that the so-called “ecological crime” — using part of an Área de Relevante Interesse Ecológico (Area of Relevant Ecological Interest), or Arie, for the relocation of Rocinha residents, to apartments yet to be built — was off the drawing board. This, despite the argument of Ícaro Moreno, EMOP president, that orderly occupation is preferable to an inevitable disorderly occupation of such land.

Instead of fire there was booing and shouting. Rocinha residents accused their São Conrado neighbors of not wanting to share space with the favela, whose growth and limits are part of the debate.

After the video, PAC II coordinator Ruth Jurberg made a Powerpoint presentation. It would have been useful to have such detailed information available in advance of the hearing, online. Strangely, only one person complained about this.

Many doubts were expressed. Would the families removed or relocated (the word used varies, depending on the speaker’s political viewpoint) by the PAC II would be adequately housed, in existing or new homes? Would the proposed sanitation truly meet the favela’s needs (or the city’s, since the project, as state legislator Aspásia Camargo pointed out, doesn’t consider the environmental impact of a considerable amount of untreated additional sewage sent out through the existing pipeline to the Cagarra islands area, a system criticized in a full-page piece in that day’s O Globo newspaper?)? 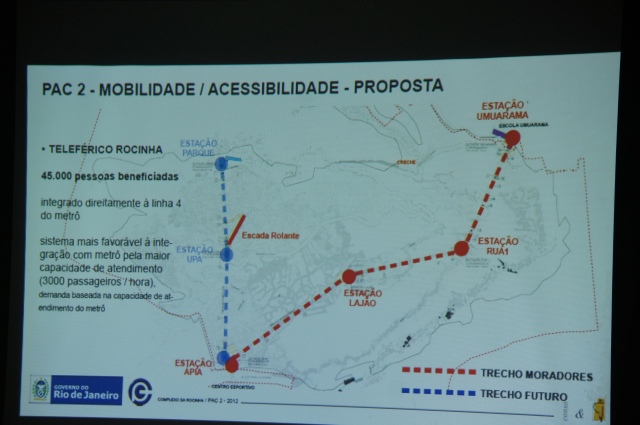 What’s the overall impact on the system?

The project proposes to link Rocinha to the Metro extension (now under construction) by way of pedestrian walkways and a cable car system. However there was no mention of the overall impact of this on the city, given the additional passenger flow; no one appeared to be present from the Metro concessionaire.

During a public hearing on the linear extension of the Metro (built instead of a network of lines), over two years ago, participants said they feared that at rush hour, Metro cars would arrive in Leblon and Ipanema crammed with passengers coming from Barra da Tijuca. At the time, Rocinha wasn’t part of the plan. 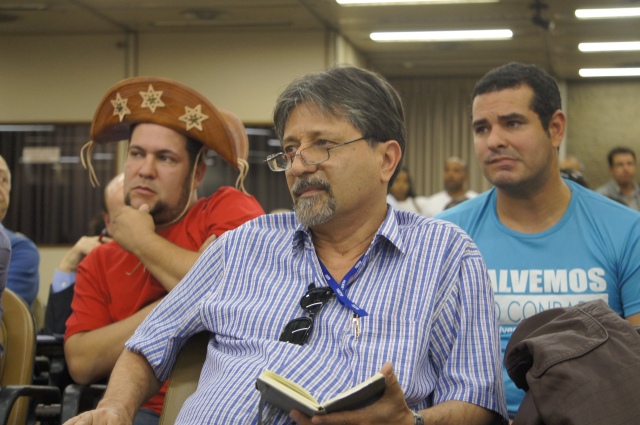 Based on the information presented Monday, it’s impossible to make a complete and fair analysis of the project. How to evaluate residents’ needs and wishes? How to determine if they were fairly represented at the hearing? The favela, with a city-sized population, is much-divided.

There is a Plano de Desenvolvimento Sustentável (Plan for Sustainable Development), drafted by the government together with residents, but it was launched two years ago, in book form — and the electronic version isn’t widely available. Thus, despite a detailed presentation (click here for it: ppt_2014_07_02_R02) by sanitation expert Ernani Costa, it’s no easy task to consider, for example, the proposed 11,300 additional meters of sewage collection piping in the context of total demand. What will the sewage picture look (and smell) like in Rocinha after the PAC II? What will São Conrado Beach look like?

From what he said, the sewage collection will not be from individual homes, but will gather what runs down the favela’s inclines in open sewage streams and send it, untreated, out to sea. This is a far cry from what residents say they want– and may simply be an attempt to offset opposition to the cable car system.

Rocinha residents said they would have preferred the hearing be held in the favela. They felt the venue sent a message of disrespect and lack of attention (Although many meetings on the favela’s future have been held there). Notably, the complaint about a possibly more serious issue didn’t come from them.

This was the lack of online availability of the relevant information. Without such data, participant preparation was certain to be incomplete.  And Guilherme Pimentel, from Meu Rio, didn’t stop here. He questioned the legality of the hearing itself, since it’s possible that the rush to hold it may have led to failure to meet federal requirements. Under his coordination, Meu Rio is running a campaign against the proposed Rocinha cable car system, and in favor of sanitation.

Public hearings are complex events. Monday’s brought worries regarding lack of trust, all parties’ difficulty with conflict resolution and working together for the greater good, and the absence of municipal government, the Metro and mainstream media, this last a great potential asset to the process, given an objective viewpoint and technical knowledge.

All concerned will surely find it important to keep tabs on the Caixa Econômica’s evaluation of the project and its execution over the next several years.

And, while we await the PAC II and this October’s elections, how about a review of our last governor’s campaign promises?