The social revolution makes itself felt 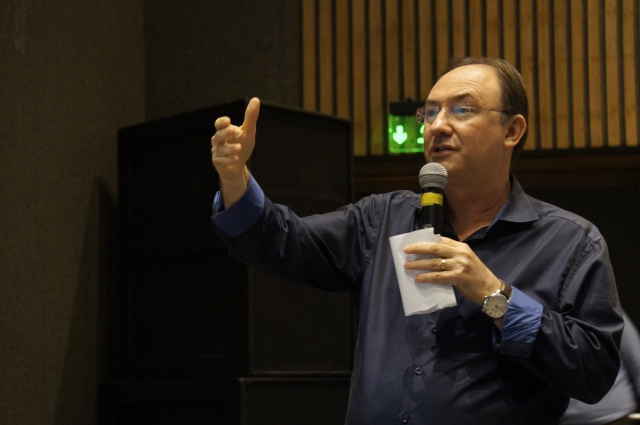 The mayor of São Gonçalo, Neilton Mulim, spoke of his challenges and achievements in the health sector — and went off to do something important, like all the other mayors who hosted the metropolitan seminars

Held in the last few weeks, the seminars — on sanitation, urban mobility, public safety and health, each taking place in a different city in the metropolis,  — were a sort of warmup for when the Chamber is fully operational (meant to be this year), in compliance with a Supreme Court decision last August. They previewed the challenges and issues to be dealt with by the mayors of the 21 cities making up the new agency, directed by Vicente Loureiro, an architect and urbanist with extensive metropolitan experience.

For this blogger, the most striking aspect of the meetings is a change in approach to inequality, particularly marked when you look at the capital and its neighboring bedroom cities.

Historically, all the seminar topics have seen dual approaches, one for the rich and one for the poor — in Rio de Janeiro and in the country as a whole. Maybe it was this dichotomy that united protesters in 2013: cars for those can buy them, and buses, subject to fare increases with no transparency regarding concession accounting, for those who can’t.

A confused meeting of the waters, like the famous pororoca of the Amazon River and the Atlantic Ocean, may be occurring (particularly confused now, in the context of the economic slowdown). The meeting might be spurring new approaches to public policy and social structures.

For example, a significant number of the millions who left poverty in the last decade purchased cars. What happened to traffic? Despite the ideas of some, who believe that new public transportation alternatives are only for the working class, traffic jams are desperate pleas incarnate for more viable and accessible mass transit. Even more desperate for those who commute to Rio from other cities.

These was also flight from the public health system, SUS, to private health plans. What happened to the private health sector? It’s become so overwhelmed that, at the last seminar, May 28 in São Gonçalo, Antonio Jorge Kropf, director for Institutional Affairs at Brazil’s largest private health business, Amil, spoke of the “need for concordance and rationalization between public and private.”

Though more difficult to see, the same phenomenon may be occurring in the area of sanitation. The centuries-long lack of sanitation has brought the state of Rio de Janeiro to a rate of untreated sewage, in 2013, of 66%, according to the Sistema Nacional de Informações sobre Saneamento (National Sanitation Information System). At very least, it’s interesting to note that the more vocal residents of the Complexo do Alemão and of Rocinha favela, objects of federal PAC spending, say they’d exchange the cable car system (already existing in the former, planned, for the second) for sanitation.

In any case, Cedae, the state water and sewage company, already shares water and sewage responsibility with private-sector providers in the metropolitan region — and the state government wants to see more public-private partnerships in this area. This is said to be the only way to make sanitation universally available and to clean up Guanabara Bay.

As for public safety, change has come in the inverse direction: after decades of private solutions, such as guards, walls, armored cars and alarm systems, the haves are the ones who make demands on the public sector.

What these movements show is that in the long term, the formerly poor and the more traditional classes are more and more likely to meet up in the subway, the waiting room and in their expectations for clean water and safe cities.

At the seminar on sanitation, there was talk of new models and partnerships between the state company, Cedae, and the private sector.

According to Amil’s Antonio Jorge Kropf,  what we now see in Brazil is a duplicate system, with a lot of fragmentation. “We have the same goals,” he added, speaking of public and private health care enterprises.

The meeting of the waters — of social classes and of the public and private sectors — will probably mean quite a few unruly waves, if not tsunamis, as the various actors learn, negotiate, relate and create the trust needed to leave behind old feudal and favor-exchanging patterns. This is the only way for planning and followup — public policy continuity — to find a place in Brazilian culture.

Who knows how long this will take, especially given ongoing social and economic losses. Could it be that the last decade’s social inclusion is just a blip? Could it be that, despite impoverishment, new demands will persist, at least in the political sphere if not in outright consumption?

It’s sadly symptomatic of Brazilian individualism that none of the mayors who hosted the seminars — in Duque de Caxias, Nova Iguaçu, Niterói e São Gonçalo — stayed for the whole event. The Câmara Metropolitana, funded by the World Bank, clearly has its work cut out for it.

But it’s good to see that, while Brazil quietly went forward with its two systems, one for each class, for so many years, something has begun to change. Which can only be good for metropolitan Rio.

The excellent presentations from all the seminars are here.